Up around 9:30—got a cup of coffee, got right to my reading of Whiteley’s The Theology of St. Paul. Read in this until the mail came after 11—after reading article in the New Republic, back to Whiteley’s book until about noon. Stopped to have lunch and watch the news. Shaved, back to Whiteley’s book at 1:00. Sleepy; napped from 1-2. 2-3 read more in Whiteley’s book. 3-4 went over to the hospital (stopped at Clark’s office on the way to get absentee ballot application for Gazella Dodd). Saw Mrs. Dodd briefly and visited with Mrs. Ellie Martin; she had broken ankle. Home shortly after 4. Decided to work on German—review for possible test Thursday evening. Worked on German until almost 6:30—with one short break at the piano to practice the anthem for Sunday. Supper at 6:30—watched CBS news—their poll: Nixon, 28 states, HHH, 3 states + DC, Wallace 6 states. More German after supper—then back to Whiteley; Virginia Bate[1] called—she’s back in town. Bonnie went to rehearsal, community chorus. Debby + I alone. Worked on Whiteley, wrote paper—finished typing about 12. Bathed; packed briefcase; off to bed after 1 AM.

A tiring day—not enough sleep last night; up at 8:30, breakfast, 9:20 train to Boston—studied Greek on train; Greek class 11:15 – 12:00. Had lunch with Nancy + Bob Peek + Larry Carter. Carter thinks HHH will win—Bob agrees with me that this is not likely. 1-3 o’clock—studied some on Jeremiah, but very weary—not too much accomplished. 3-4 directed study on Paul. 4:20—off to North Station—4:55 train to Rockport; 5:20 train stopped because Beverly Bridge wouldn’t go down. At about 6, decision was made to take us back to Salem—then we were bussed to our destinations. I got home at 7:30—terrific headache. Phone call from Jean Crowell—general approval of my singing in the choir from regular attendees she talked to. Supper—relaxed; 9:00 – 10:15—we were over to Patriquins—mainly to practice the anthem for Sunday; home, bathed by 11:30. Did some German exercises, but I am too tired to benefit much from them—I would have accomplished more on German this evening if the train hadn’t wrecked my schedule; off to bed around midnight.

Slept late—up around 10. Got glass of orange juice, went right to studying. Worked on German. Didn’t get as much done today as I had hoped—although I didn’t waste time. Lunch, shaved, while listening to news. Worked on Jeremiah D.S.; reading Sheldon Blank’s book Jeremiah: Man + Prophet up to around p. 65. Then began working in Bright’s Jeremiah for Bible study tonight. Had quiet afternoon. Bonnie + Debby went shopping after one or one-thirty—not back until around 5. After reading in Bright’s book, I began analyzing words in Jeremiah 7:1-15, to see if they occurred general in Old Testament, or were peculiar to Jeremiah + Deuteronomy. Had supper at 6:30—watched CBS news. Worked some more before Bible class arrived. Had 9 in attendance. Did 11:18 – 16:21. Right to work on word analysis as soon as the class was over at 9:30. Had to organize thoughts on Hyatt + Skinners treatment of 7:1-15. Bathed, packed briefcase. Off to read in bed at 12:10.

Up about 8:40; Breakfast; took 9:20 train to Boston; Greek class 11:15 – 12:00; noon, had lunch with Bob Peek, Larry Carter + Don Richard; made Xerox copies of pages from Vincent Taylor’s book on Mark; last minute preparations for D.S. on Jeremiah—saw Charlie briefly before and after this class. It was rewarding today—not that it isn’t usually rewarding, but it seemed more so today—our concern largely was in comparing the temple sermon on 7:1-25 with parallel version on 26:4-6; caught 4:10 train home—worked on German, in which I am far behind. Home before 5:30; letter from Dr. Beck. Had supper, relaxed, then off to class at Gordon. We had a test. I am sure my grade would have been poor if I were taking the course for credit. Home shortly after 9. Bonnie + I decided to see about moving to England next June for studying; wrote to Beck for his advice; wrote to Kenneth Klaristenfeld; bathed, off to read in bed at midnight. ISN, lights out at 1 AM.

Up around 9—no breakfast. Began working on my sermon. Bonnie slept, I took Debby downstairs with me. Worked on the sermon on the dining table. Took time to look at the mail when it came—did not push myself working this AM. Lunch about 12:30, watched noon news. After lunch, shaved, went to Post Office with the letter to Harrell Beck, picked up vote application for Ellie Martin, changed wayside pulpit. Came back home, finished sermon shortly after 3:00. Went to make calls at hospital: Ellie Martin + Gazella Dodd. Found Mrs. Jodrey there too. Went directly from hospital to Rip Hannibals. Was home again shortly after five. Two phone calls to Homer Orne + Forrest Clark. Helped Bonnie with supper. Peeks arrived before 6; we had supper, watched CBS news. Bonnie fed Debby, I did the bulletins, then we spent the evening looking at Peek’s slides of Europe. Had pie + drinks at 11 – 11:30; more slides—finished shortly after 12; prepare for bed—off to bed at 1 AM.

Up a little after 8; shaved, small breakfast; shortly after 9 we were off with the Peeks to New Hampshire. Our main destination was Franconia Notch and the “Flume.” This was Debby’s first extended trip, and she was wonderful. We put her in the back carrier—on my back—while hiking—and she seemed to enjoy it. We walked a couple or three miles through the Flume, had lunch in the car near “old man in the mountain”—drove around through the mountains. We wanted to go up Mt. Washington, but the weather was too bad: 19°, 90 MPH winds, 8 ft. drifts. We stopped at the ski headquarters where Peeks often go. We started home shortly after 4. Made it home in record time probably; Bob drives very fast (we were home shortly after 7:30); at one point he was going 105 MPH! Had supper with Peeks here at home—they left about 8:45. We relaxed. I prepared the service for tomorrow, having already done the sermon + bulletins; watched 11 o’clock news—bathed—off to bed at 12—we have set clocks back—1 extra hour of sleep!

Slept late; ISN, up around 9:30. Shaved, ate light breakfast. Reformation Sunday, preached on “Luther’s Discovery.” Sang in choir, Alice Marr didn’t stay for practice; perhaps she’s dropping out. Bonnie sang in the choir—Vicky Gamage  + Carol Gahn [?] took Debby out in the buggy. Home by 12:30. Had lunch, napped most of the afternoon! Still somewhat fatigued from yesterday. Called Alan Frederick after church to invite him up for tea; he had other plans, will come up tomorrow after 4:00; got up from the nap after 4:30, went to work trying to restore order to my desk. Had supper around 6:30; went over to Loyd Starrett’s to deliver materials on films + programs for youth program. Went to Wesley Church in Gloucester for Methodist Men program; told Jim Bussey of our possible move to Europe. Home again around 10; desk work; watched news at 11; 11:30 – 12 saw Nixon interviewed; bathed; off to read in the bed at 1 AM. 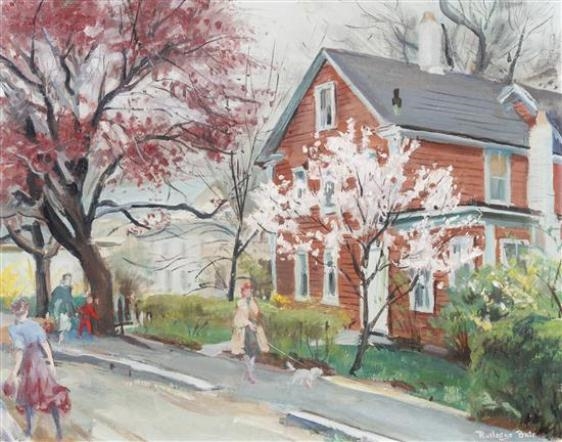 Painting by Rutledge Bate (1891-1964) of Rockport, Massachusetts (Image from the MutualArt website)

[1] One of the truly remarkable spirits in Rockport. Widow of an accomplished artist, intellectual, anti-war activist.