Up about 8:30—phone call from Roy Lee—Sue is sick and can’t teach her class; I was able to get Mrs. Haskell to step in. Shaved, had small breakfast; my Sunday school class met from 9:30–10:30—Karen + Bill say they’d like me to teach them Hebrew! Left for church—not very many out—preached on Micah. Home by 12:30.  Had lunch, then went to work analyzing the C.A.M.P. Questionnaire. This occupied me until shortly before I had to leave. About 3:10 picked up Gladys Haskell; we drove to Riverdale C.A.M.P. Met until about 5:00. We decided to work with local groups and petition the Fund for Reconciliation for funds to help fight the drug problem; also agreed to show the film, “Black History: lost, strayed or stolen?” When I got home, helped fix supper; after which I did some desk work—sent $30 check to PP/WP; $40 to New Republic; $10 to Civil Liberties Union. About 7:30 left the house, mailed the letters, picked up Virginia Bate + Elizabeth Knowlton—we went to hear Congressman Harrington speaking in Gloucester—a good man—I introduced myself to him afterwards and told him I was satisfied with his answers. Came home (dropped of[f] Virg. + Eliz) had snack; bathed, OBLO c. 11:00. Θ

Up before 9:30. Had only juice for breakfast—my main concern for the day was a book by Harold R. Willoughby, Pagan Regeneration: A Study of Mystery Initiations in the Graeco-Roman World (1929)  We will be touching on the mystery religions Wednesday in seminar. I spent the morning with this: also in the morning I called the Bishop’s office inquiring about my membership—still no word. But—around noon time I got a call—my transfer had come in late in the morning—but, it listed me as an Elder! After Bonnie got home from shopping (groceries) I helped her in the kitchen; we had lunch; she went to work—I got back to Willoughby’s book. I have found it very interesting—the parallels with Xnty are really striking—in some ways Christianity appears as a mystery religion among several mystery religions. I become more convinced that Xnty must divest itself of the superstitious elements: resurrection e.g. So much of the N.T. is objectionable—clearly a product of the mystery milieu.  Helped Bonnie with supper; read until 6:30; watched CBS news. We left Debbie with Patriquins. Bonnie went to chorus rehearsal; I went to Gloucester—got check from C.A.M.P. treasurer; went to Concerned Citizens; home by 10:45; read in Willoughby; OBLO, 12:12.

My main concern of the day was to finish Willoughby’s book. I didn’t get up til 9:30. But I had just a brief breakfast, then got to work. Late in the morning I took time out to write a letter to Mrs. Myers. We had lunch around noon—then I went back to reading and Bonnie went to work. Late in the afternoon I shaved, then prepared my Bible lesson for tonight—chapters 9-12 of I Kings. I put chicken in the oven about 5:00. Then read some further. We had supper about 6:30. Shortly before 6:00 we had an hilarious time with Debbie and two balloons which Bonnie brought home from work. Debbie[’s] reaction to a balloon whipping around—the air jetting out—was priceless. After supper Bonnie got ready to go to chorus board meeting. I prepared to meet the Bible Class—6 in the class besides myself. This was over by 9:30—then I spent the rest of the evening finishing Willoughby. Beck stresses the importance of recognizing many “messiahs” (i.e., anointed one), e.g. Martin Luther King. This becomes increasingly important in view of all the religious clutter which surrounds the first Xn messiah, i.e., Jesus. Early Xnty is too close to the Mysteries—which were great hoaxes. Worked on annotated bibliography after finishing Willoughby; desk work; bathed; OBLO, 1:10.

Up about 9:30. We had a phone call from Carol Lewis—she’d like us to drive her home, after she leaves her car at the garage. We got out of bed, were having breakfast when she arrived. Bonnie took her home—after she warmed up with a cup of coffee—a cold morning—I shaved, prepared to leave. Caught the 11:15 train for Boston. Read some, dozed some. Arrived at BU shortly before 1:00. Had my lunch, checked at the Bursar’s office about my refund check. Did some reading, then went to Beck’s OT Theology lecture—he was in prime form. Did some further reading when this was over, then at 3:30 joined Dr. Beck for making tea for seminar, which met from 4:00 to 6:00. Not really one of the better sessions—one member read his paper—but Beck had to cut him off at 5:00—he had a huge stack of sheets in his mss. I caught the 6:40 train home—but it didn’t leave til 7:00—and was delayed further—got home 50 minutes behind schedule. Had supper, then played with Debbie; since I got home late the evening was a short one—but I finished the chapter in Finckelstein on Pharisees, which I’d read on train. Started rereading Cross’s Qumran book; watched 11 o’clock news; bathed; watched Johnny Carson; OBLO 12:32.

Up about 8:40. Bonnie’s big project for the day was a trip to the mills—she took Carol Lewis with her. I was in charge of baby-sitting—and Debbie and I got along very well. After Bonnie left I had my breakfast. Then I got to work rereading Frank Cross’s book, The Ancient Library of Qumran. Debbie was content to play in her room all day. We had lunch around 12:30. In the morning the mail man brought I.F. Stone’s Weekly, which I read immediately. After getting the two of us fed, I went back to reading Cross, and stayed with this most of the afternoon. Bonnie got home with bagsful of cloth. She napped a while, then we got supper—I baked a batch of corn-bread. We watched CBS news. After supper, Larry Burton called re: the visit with us tomorrow. I photographed Debbie sitting on the bed amongst all of Bonnie’s new cloth. Then I turned again to reading in Cross—got well over ½ through the book today. After 9 o’clock I turned to working on the sermon. I want to have it done when Burtons arrive. It’s on lent—vaguely—I’m not really very enthusiastic about it. Stopped to bathe c. 12 o’clock—listened to My Fair Lady, OBLO, 12:37. Θ+ 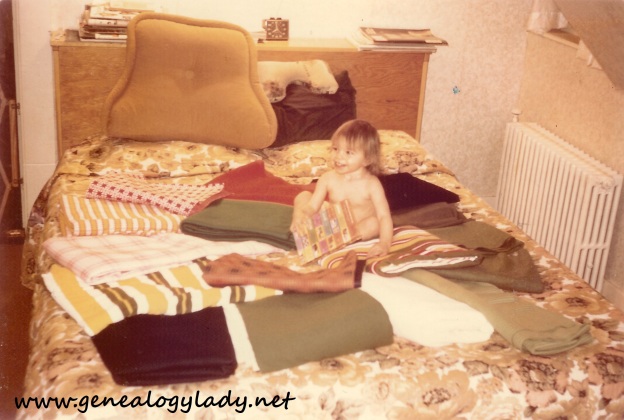 Debbie sitting with lots of fabric, 1970