Up about 9:00; had breakfast—was occupied at my desk for a while; the mail man came early—as he has been recently—more Xmas cards, plus another New Republic, which I spent some time with. Late in the morning Bonnie prevailed upon me to mimeo my poem, “Christmas Is All Very New” onto the Paul Klee UNICEF Xmas cards which mom had sent us. She has a list that she wants to send them to. I caught the noon weather forecast and the snowstorm headed this way for tomorrow threatened G’ma + Emil’s trip up. So we called them and offered to come and get them—they accepted. I would have gone, but Bonnie insisted that she do it. We had lunch, I made a quick trip down to the neck to do some final shopping, then came home so that she could go. She left about 1:30. I did some wrapping, played with Debbie—but most of my time was spent preparing tomorrow night’s service—also did some shoveling of snow. Late in the afternoon I prepared supper. Unfortunately the snow situation was worsening—and Bonnie and G + E had a very treacherous trip. Didn’t get here until about 7:00! And they left Avon at 3:30! We had supper when they arrived; I cleaned up; went to Richdales for kitty litter—but the rest of the evening was spent relaxing, visiting—started on the stencil for tomorrow night’s bulletin; 11 o’clock news; bathed read in I Corin. OBLO  c. 1:30.

Up about 9:00. Had breakfast, then made bread—looked over the mail when it came; ran off the bulletin for tonight’s service. Then watched noon news—for weather report mainly—storm still raging. After lunch I shaved, then headed off to do some errands; went to the church to get things set up for tonight’s service. The Kramer boy + his group were practicing—at very high volume. Lois Clapp came in to refamiliarize herself with the organ. Before going to the church, i.e. my first errand had been going to the P.O. to mail the Xmas cards which Bonnie decided to send out! From there I dropped in to see Virginia Bate—gave her a couple of books for Xmas—also saw her aunt Amy for a few minutes. After getting home from the church I had a while to work on tonight’s service—then a few minutes before 4:00 Bonnie + I went to St. Mary’s for the Sunday School Service. Home by 5:00, fixed supper. Then I worked further on the service. Left for the church about 7:30. A miserable turnout: only 10 in the congregation; 2 major goofs: I planned too much and it had to be cut short, and Lois played the wrong processional! We got home about 9:15, then had our gift exchange—until about 10:15; Debbie played Santa Claus—very nice gifts all around. We watched 11 o’clock news; read a while in bed; LO 12:30. 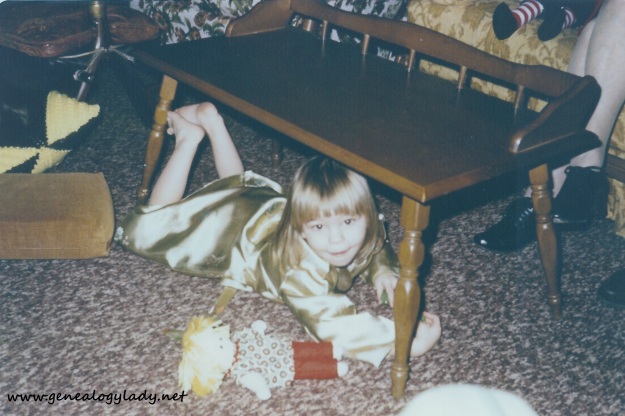 Up about 9:30 after Θ (a nice Christmas present to each other to start the day!)  After breakfast I turned to shaving—but before breakfast—just as we were preparing to start, a phone call came from mom + dad—we had a nice chat. I was prepared to work on my sermon today—but that kept being put off. Early in the afternoon, after lunch we called Lea—mother told us she’s had another mis-carriage, so we wanted to cheer her up if possible—so we had a nice long chat with her. My new Christmas clothes (4 ties, 4 pairs of trousers) sparked interest in my wardrobe, so the early part of the afternoon I spent going through it all—and threw some things out. In the middle of the afternoon I started to put supper together; I still hoped to get started on my sermon, but just too lethargic = to back up—around the noon hour Dr. Beck called to wish us Merry Christmas and we had a nice chat with him too—it was really great of him to call. Late in the afternoon I dozed in my chair—made a slight beginning on the sermon—and fixed supper—Bonnie feeling pretty lousy—as she was til later in the evening. After supper CBS news. Then I made progress on sermon; we showed 1970 slides to Grandma + Emil. Then more on the sermon; watched 11 o’clock news; bathed; worked further on sermon; OBLO 12:50.

Up by 8:30—another snow storm raging. After breakfast I turned to the sermon. I.e., writing out the final draft from the rough draft. I got a large part of it done in the morning before we got lunch. I shaved after eating, then went back to working on the sermon—got the bulk of it finished. Then Bonnie, grandma + I set off for Mals—we did some shopping—bought yarn to make an afgan for Bonnie (G’ma will do it—she even bought the yarn!) I looked at trousers, but the only ones in my size were expensive; one pair which we got the other day doesn’t fit well, so we’ll exchange it—the exchange line was too big today. We got an electric clock and I bought the stereo music score from Alice’s Restaurant. We also bought groceries at Stop + Shop. After coming home I went up to see the Hannibals for about 45 min. Home about 5:00, then we went to China Port restaurant in Gloucester and had a great Chinese supper—s + s duck! When we got home we all relaxed, listened to Alice’s Restaurant, Marion Anderson, Joy Is Like the Rain [1] also took down the Xmas tree—very dry + brittle. I worked on the sermon—completed it; did the bulletins. Took time now + then to socialize. Bathed about 11:30. Prepared service; practiced sermon. read in bed, LO. Θ c. 1:00 AM.