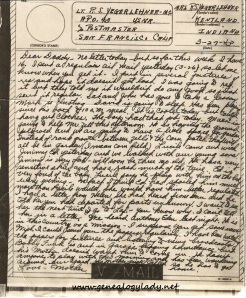 Dear Daddy – No letter today but so far this week I have 16. I sent a regular air mail yesterday (3-26) so let me know when you get it. I put in several pictures of us and hope it doesn’t get lost. I was going to reg. it but they told me it wouldn’t do any good so just sent it regular. Sat. and John has gone to take a lesson. Mark is dusting. David is going to sleep. Has been playing since his bath & 10 a.m. meal . It is cooler today but could hang out clothes. The boys had that job today. Mark is going to help Mr. Zell this afternoon. He is giving the ground plowed and we are going to have a little space for garden. Instead of rank growth between Zells & the corn patch that will all be in garden. (I mean corn field) Lucile came out with Jimmy Ed yesterday and we walked with our young sons. Jimmy is very fat – will soon be three mo. old. He has a very sensitive skin and has a rash much of the time. Ed is very fond of the baby. Lucile says he plays with him on the bed every evening – in fact I think Ed has spoiled him much more than Lucile would. She would have him better regulated. I had a letter from Helen. She had heard from Dan and he told her you had departed for parts unknown. I want to see her the next time I go to Laf. – you know why. I can’t tell her in a letter. We heard Anthony Eden last night. He is in this country on a mission – I suppose you get some news. Wish I could send you the papers regularly. I have been watching the papers for pictures and listening to news broadcasts. Bobby Funk is out in garage begging admittance but his Mother doesn’t want him to come in. He hasn’t anyone to play with this morning and has been wandering around our yard. His Mother just called so he has to go home.

Helen with her brothers, Forrest (aka Bud) and Charles, 1942 (Photograph courtesy of Judith Bowen)