Yours of Sept. 28 & 29 came today. Also this letter from Mead Johnson & Co. Thought you might like to see it. I will write them & thank them and if you want any vitamins you can write too. I went to town this a.m. – the stores still close Thurs. P.M. and I needed a few things. I heard that Doris Wilson is going to have another baby – There last is just younger than David. Did I mention that the Bob Hufty’s are also looking for the bird again? I believe some time after the first of the year. It seems this wave of babies is still riding high. The Herb Richcreeks’ have a baby boy several weeks old. I told you before that Louise Krull is expecting again. I saw Mary Thompson Tues. and she looks like she is ready to go to the hospital anytime – and Oct. is her month.

I am planning to go to the hospital again tomorrow and intend to bring Dora Diedam home for the week-end. She is a grad. now & works in O.B. She was on 3rd north just around the corner from Mother’s room but she was changed to 4th . Alice is in training now and Dora told her if she intended to smoke and do things Dora hadn’t done while in training she couldn’t come down there. There are three Kentland girls there in the new class: Mary Tuberty, Alice D. and Joan Hall. The hospital is so short of help they are going to put the new class on the floors as soon as they can get their uniforms. The maids have to help with patients sometimes now. Mentioning the uniforms makes me think of the cotton goods shortage on the market now. I tried to buy shirts for John and Loeb’s only had rayon at $2.50 ea. I got two shirts, at B. & B. and they fit except for the arms (sleeves) & John’s arms are so long. I am

[page 2] going to try & get a size larger if they have any. Mark has plenty of shirts – he gets what John outgrows.

I hid Mark’s bike and he thinks it has been stolen. I am going to let him walk to school a few times then maybe he will be more careful – or will he?

Ina May Walkup is going to have an operation on her neck – do you remember her – in John’s class and her head is drawn to one side. The class is having a party for her this evening after school and J. has to take jello & 5¢. John was talking about football today and I discovered he has to play every day in physical ed. I asked him about his glasses & he says he just leaves them on. His hay fever is much better and he hasn’t complained of a headache lately. David’s cold or allergy (I couldn’t tell which it was) has cleared up too. His vaccination is getting along fine. There is a scab forming now.

My throat trouble seems to have cleared up. I told John I was allergic to our company because after they left I didn’t have sore throat – and I hope it doesn’t come back. If it does I’ll go see Dr. Ade again. I was glad to have Glen & Pauline here but I believe I was nervous with someone else around all the time & that contributed a lot to my throat condition. It seemed I was in the kitchen cooking or washing dishes most of the time. Pauline did a lot of work for me – the house cleaning, but there was more or less confusion all the time with two babies to feed & bathe, put out of doors, etc.

Lucile Ortner Jones has been in Manitowac with Ken but is back and is going to work for Nick – I think she is going to cook. – Doris Green is married & Van Scoycks’ daughter Margaret is going to marry a Dr. Klemsmith, a chemist – John Sullivan has the auto license office now & Dorothy Nugent is going to be clerk. – Bill Nugent won first at Hazeldon’s golf tournament. I scanned over the paper and collected these items – almost forgot Joe Fletcher is going to work for the Power Co. 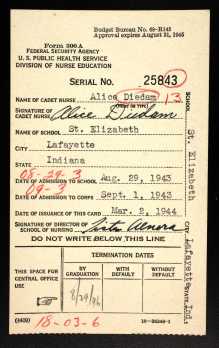