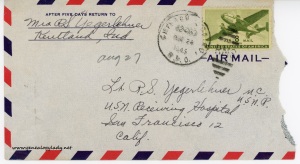 Will write this evening while I have time to sit down and concentrate – if that is possible with the radio going. J. & M. listening to Dr. I.2. I sent your khaki pants & shirt and in another package David’s picture wrapped in last week’s hometown papers and a family picture. I was downtown and saw Ellsworth. He was quite confident you would soon be home. Said he didn’t have enough points. We heard more news over the radio about Navy men being discharged. You said you were going to be traveling today, so in case you missed it – we heard it twice – a very large number of enlisted men and officers are to be released and that the point system is to be revised, that is, overseas duty to receive extra points. I suppose you have heard the whole thing. You should get your gold braid by now since it went out Sat. afternoon.

I am planning to take John to Laf. tomorrow. Lucile wants to take Jimmy down and see Dr. Ade if possible. He is still having quite a lot of asthma & hay fever. Dr. M. increased the phenobarb to ½ tablet a dose instead of ¼.

Mark is to take a music lesson tomorrow. He really hasn’t practiced enough but I think maybe I’ll get him setted a little more after school starts. He was gone nearly all day with Buddy & Sammy. He cut the lawn early, then the three went to Washburns until noon then this afternoon they went down to Krulls to help Bud cut the lawn so he could play. I told Mark he had to stay home tomorrow. Two days in a row is enough playing (Sun. & Mon.).

Funks were to come home Sun. but so far I haven’t seen any of them. I imagine they will get home in time for school Wed.

I sent the Russells David’s picture and wrote them a letter. Also answered Mrs. Thrailkill.

[page 2] We have been fighting mosquitoes. I sprayed with flytox last night and thought I had all, but I was nearly asleep and heard one. I thought I got it but evidently I missed – David got a bite on his left ear and it was swollen today but not quite as bad as the one he had when you left.

Gen. De Gualle spoke over the radio from Chicago this evening. We listened, but since he spoke in French we didn’t get much until the interpreter came on. John caught a few words.

Krulls came out last night to get Buddy. He came out to play with Mark after supper. Bobby had quite a time crawling around and the fuel pot by the fireplace was the first thing he started for. I put it back of the screen. Dorothy allowed him to play out of his pen while they were away, so I think she won’t be able to keep him in it now. He likes to get around too well to stay in a pen.

Next day – Back from Laf. Lucile talked to Dr. Ade and made an appointment to take Jimmy down Sept. 11 for allergy tests. She didn’t have an appointment to see him today but I took her in with us and she talked to Dr. while he was getting ready to work on John. He says John’s lenses need a slight change. He is to go back Fri. for a recheck. You will probably not get this letter when you should because it is too late for it to go on the regular mail, but will send it out on the late train. The piano tuner came today. Nothing had to be done but the regular job. He was thru by 11 o’clock. He was going to do Zells & Shirks too.

Irene is back from the hospital. She said they got rid of the blood clot, but the Dr. didn’t give her any hope as to when she would be rid of phlebitis. Irene says she is going to start a petition. If you are tired of me talking about that – let me know. Arlene came up today. She is looking fine – says she feels rested now. She has a girl staying with her from Wisconsin. Bobby starts to school tomorrow. Mark is a little worried about starting at the high school.