April just about gone – It rained this morning, but it’s warm. I took David to church this morning and he behaved very well. His lip looks fine and baring falls will look normal again soon. I have noticed however that one front tooth is pushed back out of line. Dr. M. examined his mouth rather thoroughly for loose teeth but they seemed intact. Sat. when he took the stitches out he said as soon as his mouth heals to take him to the dentist. It wasn’t the broken tooth that got pushed back but the other one. Dr. M. said he felt like doing something to me for allowing him to fall and cause the bleeding around the stitches, but someone would have to carry him around all the time to keep him from falling. Dr. M. was afraid there would be a scar but after he got the stitches out it looked pretty smooth.

The sun is shining now. I hope it keeps shining so I can take D. out after his nap. He is getting quite a tan. Was out so much yesterday.

Mark went with Zells to Morocco to see a show last night. John stayed home and did homework. I ironed something I couldn’t do on the ironer. I thought after I went to bed David might be getting the measles. He would cry in his sleep – did that several times, but finally settled down. It will be two weeks Mon. since he was exposed. I am hoping he is going to sail thru.

I got a suit for John in Laf. but had to send it back because the sleeves were too short. I went to the tailor here to see about getting a suit made for him but Mr. Corbin said he wasn’t able to do much now so wouldn’t take the job. I thought I may go to Laf. again 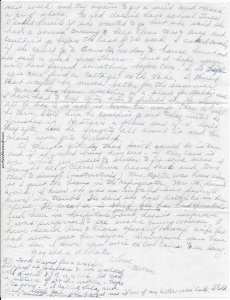 [page 2] next week and try again to get a suit and Mark a pr. of shoes. Mark doesn’t have school Tues. I asked Lucile if she wanted to go but she said she had a woman coming to help clean Mon. & Tues. and couldn’t go before the last of the week. I asked Dorothy if she could go to Evanston one day to house hunt and she said a week from Thurs. – but I hope you will have found something before then. I do hope you can find a cottage on the Lake. I think that would be much better for the summer.

Mark has been working on a plane for Bobby and I have had to keep after him to finish it. He says all he has to do now is cover the wings then he will be thru. I told him he couldn’t go out today until he finishes it. He starts a plane and if I don’t keep after him he forgets all about it and the plane never gets finished.

Al thought yesterday that Smith would be in town and if so would bring him out – If they came it was while we went Sheldon to get some meat. I brought all of Clara’s lima beans back and took them to Henry’s (instructions). Mrs. Molter was home alone so I put the beans in the refrigerator. Mrs. M. doesn’t walk. I knew she was an invalid but didn’t know her trouble. She said she had arthritis in her spine. The local Dr. is Glick. She has had operations and been in the hospitals for treatments but doesn’t improve. I was surprised to see such a young woman. I have heard Rose & Clara speak of Henry’s wife but had never met her before. I suppose you have met her. I know you were on two calls to see Henry.

P.S. Took David for a walk – Stopped at Johnsons & we walked with Lucile & J.E. awhile. Ed took a picture of D. & his mother – hope it’s good. I called Lila and had a little gab. She asked me if one of letters was late. I told her I would wring Joe’s neck.