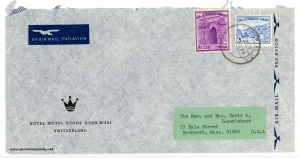 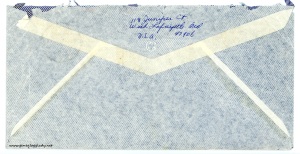 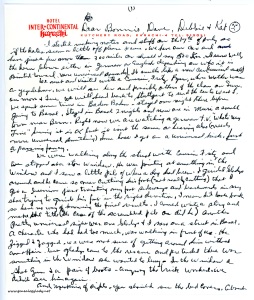 I started making notes and stuff on the 17th of July so if the dates seem a little off please excuse. We have our car and have just a few more than 300 miles or should I say 500 km. It runs well, the horn blows either in German or English depending on who it is pointed toward – more universal sounds. It smells like a new car (universal smells).

We met and visited with a Cousin Fritz Pyser, whose mother was a Yegerlehner. We will see her and possibly others of the clan on Sun. On Mon. & Tue. we will head back to Stuttgart to send the car to West L. We spent some time in Baden Baden – stayed one night there before going to Basal. Stayed in Basal 2 nights and now are in Muri, a small town near Bern. Right now we are watching a German TV “What’s My Line.” Seeing it is OK but it isn’t the same as hearing also (needs more universal something). Somehow I got on a universal kick. Just a passing fancy.

We were walking along the street with Cousin Fritz and we stopped at a store window. He was pointing at something in the window and I saw a little pile of where a dog had been. I guided Gladys around and he came so near cutting his foot (not really cutting) that I got a bunion just twisting my foot sideways and backwards in my shoe trying to guide his foot in the right direction. I never did look back so have no way of knowing the final results. I could write a story and make the title “The Case of the Scrambled Pile or Did He?” Another pretty universal sight was one Gladys & I saw on a street in Basal. A character who had had too much, was walking in front of us. He zigged & zagged. We were not sure of getting around him without an affair – but Gladys came to the rescue and pretended like there was something in the window she wanted to buy – in the window a shot gun & a pair of boots – anyway the trick worked. We didn’t see him again.

And speaking of sights – you should see the bed covers. About

[page 2] a 6 inch layer of eider down in a huge pillow slip like affair. The first morning when I awakened & still a little fuzzy I looked over toward Gladys and this think cover “sorta” balled up in the middle made her look like she was not 6 mo. pregnant but like she had 6 pregnancies all in one (I said I was a little fuzzy). I jumped out of bed to palpate and found she was lying on her stomach and the big pile was the down all in a bunch. What a relief? She didn’t seem to be complimented when I told her she stuck up that high in the back. What a sight!

As we were passing a bank just at closing time there were scores & scores of girls coming out – all in very short skirts. Surely those skirts had shrunk during the day. I just don’t believe they looked like that in the a.m. – maybe the girls grew during the day. Did we have to come to Switzerland to see no skirts? You dirty old man! (Omit the work old please). We did see several old Cathedrals in some of these old towns. Many of these churches were built before America was discovered and they are still in use today. Our cousin in the country told us his combination house & barn was approximately 200 years old and it looked & smelled every bit of it??

Things seem to happen and time passes and this is one week late. We went back to Sundelfinger & made arrangements to ship the car back. We are not in Karachi – despite the hot & stuff we are very comfortable on the 8th floor of the Intercontinental Hotel. It is fully air conditioned but outside it is only fully. The first rain in 2 years fell the day before we arrived. Now there is mud & dust where before it was only dust. Our airline Lufthansa furnished us with a car to get to the Hotel. It took us 25 minutes to make the trip. Needless to say they also furnished us with a driver. The streets here for the most part are not named or numbered. We contacted some people from the church business management and they showed us around town & some country. The streets are wide enough but some are very rought & the traffic is right handed. There is a constant water shortage, so not many green lawns but there are several trees. Like many of the streets in this part of the world there are people & more people. There are so many I’m sure they can’t all get home in one day. It takes two days to make it. There are some trucks, many taxi cabs, many camel carts, many just plain cars & lots of small carts with cute little asses hitched to them. Not the rounded & pink as you might think but they are grey & have long ears. Many of the stores, etc., have English signs. We were in the old city. Also in the Banking & industrial areas. Gladys 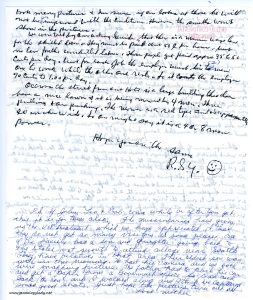 [page 3] took many pictures & I’m sure if one looks at those he will not be unimpressed with the conditions. However, the smells won’t show in the picture.

We were told by our acting guide that there is a minimum wage low for the skilled labor. They must be paid about 50₵ per hour – but no law for the unskilled laborer. Those people get paid approx. 35 to 50 centers per day., but for each job the employer must hire two men, one to work while the other one rests – so it costs the employer 70 cents to $1.00 per day.

Across the street from our hotel is a large building that does have a nice lawn & it is being mowed by 4 men. Three pulling & one pushing. The mower is a reel type and is approximately 20 inches wide. So one might say it is a 4 or 8 man power.

Hope you are the same

P.S. If John, Lea & Bob come while or after you get this it is for them also. The missionaries have given us the V.I.P. treatment which we have appreciated. I think they do not get as many visitors as some places. One of the family has a son and daughter going back to the States next month to attend college near Seattle. They have relatives in that area. Their oldest son was with us this morning. He had his camera and we both were snapping picture. The father had to park his car and get a paper from a government office so Dad and Jack (the son) and I walked along and I think we captured some good shots. Just hope the pictures turn out ok. 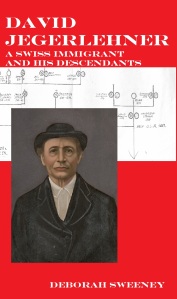 I am going to try to write a fairly regular progress report to keep myself motivated while writing the Jegerlehner history. So here is this week’s report:

I have finished the basic outline of the descendants of David Jegerlehner for five generations. The outline is 29 pages long, and lists 254 descendants (and an uncounted number of spouses).

Here is a breakdown of this week’s facts:

Generations 6 and 7 (and 8) will not be included in this book but will be a project for another time.

In the past month, I have received assistance from two of my most awesome librarian friends, Celia Ross, from the University of Michigan (Kresge Business Administration Library) and Noelle Boc, from the Tewksbury Public Library (where she is the best children’s librarian EVER!). My father’s cousin Steve has provided me with more family documents, including copies of the biographical pages from the Yegerlehner family bible. Amberly who writes the blog The Genealogy Girl did a look-up for me in some Swiss records on microfilm at the BYU library. There are also countless other anonymous people who have assisted me from places like Find A Grave.

The Jegerlehner family has some amazing people in its ranks, including an astronaut, several mathematicians, and an United States amateur chess champion. Of course, my personal favorites are a librarian and a dramatics and musical arts instructor, from the early half of the 20th century. I wish I could have met them.

It is time to start digging deep into the family history, like never before! If you are a Jegerlehner, Yegerlehner, Yagerlehner, Yeagerline, Yagerline, Yegerline, Yagerlener, or Yager-Lehner descendant, please let me know! I am looking for family stories to embellish the cold hard facts (birth, marriage, death, etc.)

About halfway down the above ship manifest from the Northumberland which sailed from London to New York is the name David Jacalander. He sailed to America with his wife and three children: Madga, Christian, Rosena, and John. The ship arrived in New York on 26 April 1851. David and his family were natives of Switzerland. He was a weaver by trade. The rest of the page is filled with the names of Swiss immigrants of various trades: wheelwright, cooper, dyer, tailor, joiner, and mason. Perhaps the group was traveling together to the new world, to begin a new community. The reason for the emigration of the Jacalander family is unknown. A family legend speaks of the fear of impressment into the Prussian army.

While Jacalander is not a Swiss surname, Jegerlehner is. The Swiss are very protective of their heritage. Even today surnames are registered and can be located on the official Registry. Since the family departed Europe from London, likely the lowly English clerk did not understand the thick German Swiss accent when he recorded the family on the manifest. In America, David Jacalander became David Yegerlehner, the ancestor of all who share the name.