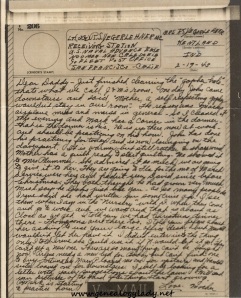 Dear Daddy – Just finished cleaning the “gopher hole” – that’s what we call J & M’s room. One day John came downstairs and said “Mother, a self respecting gopher wouldn’t stay in our room” – The reason was Mark’s airplane mess and mess in general – So I cleaned it this evening and Mark has a corner in the dormer – that is the dormer is his. He is up there now at work – and should be practicing on his horn. John has done his practicing for today and is now lounging on the davenport. It is warmer but still rather a sharp wind. Mother has a quilt ready to start quilting. We showed it to Mrs. Plummer. She admired it so much we are going to give it to her. They are going to Fla for the mo. of March. Servies were here and hadn’t seen David since before Christmas. They both thought he had grown very much. Mrs. S. says he looks just like you – as so many people do. Irene said I am in the “Nursery” with D. when they come and go to work and we wave and that is about as close as we get. I told you we had Christmas dinner there – Thompsons were there too. I told you before about her asking to use your large office desk but Newell wouldn’t let her have it. I didn’t enter into the thing only I told Irene she could use it if n. would let it go. They can’t get a new one. There are so many things can’t be bought now. Arlene needs a new bed for Bobby but can’t find one to buy. Fortunately Mary P. loaned me one for upstairs and Harold’s sister loaned one for downstairs. I will be looking for a letter with your suggestions about the lawn. Will send you pictures of the yard after things start growing. Mark is starting to practice horn.

2 thoughts on “The Gopher Hole (Gladys)”