Today marks our 14th. Just hope we can celebrate the 15th together.

It is still on the rainy order here. Last nite we had a clear sunset but by the time we went to bed it was beginning to storm. It is undecided this a.m. Right now the sun is shining & Mark is out with David getting some Vit C. In spite of the rainy weather we get David out between showers enough to keep him tanned. He will certainly be well tanned if he keeps on the way he is going. He has skin like his Daddy – Mark was helping with his both this morning and commenting on how handsome he is because

[page 2] he looks like Daddy. Ruth called David “little Jake” while we were over there. He is 8 mo old, weighs 19 lbs and has a tooth. He was as glad to sleep in his own bed again as the rest of us. The bed Ruth had borrowed for him was just a small crib and it cramped his style.

This letter and other things encl. came this morning from St. E. I think I covered the situation in my letter after I attended the ceremony but they requested it be forwarded so here it is. When we went to the P.O. to mail your letter last nite (6 P.M.) Parr handed John four letters from you. So far the latest is May 10 and one check for 150⁰⁰ is here. You said in your latest you would wait a few days to send the other.

Mr. Zell said every member at Rotary last night wrote you a letter so your mail should pick up.

[page 3] I am going to take John to Dr. Ade this week for a final exam, and also I want to take Mark to Dr. Cole. He has been showing signs of nervousness again – He was doing pretty good until, since school has been out. He shakes his head so much. I put him to bed early last night and am going to try and keep him from playing so hard. He seems to feel good and has a good appetite but shakes his head. Dr. M. looked at his tonsils after he had measles and said they looked bad, however I think I’ll take him to Dr. C. for a going over. If he needs his tonsils out I would rather leave him in the hospital a day or two. He thinks he is going to have a picnic having an operation – you know him – he is really anticipating it with relish. Mark was so tired & worn out from our trip I didn’t send him for a piano lesson this morning. Don’t worry about him because I am sure with rest and a little less excitement he will soon be over this condition. He plays so hard and last week was the first week of vacation. I think he

[page 4] tried to cram too much into the first week.

Our garden is still too wet to work in and the weeds are growing more daily. I got radishes & onions yesterday after we came home and Mark got such a thrill out of his first garden stuff. The potatoes are up about a foot high. They have done better than Zells in the same patch. Mr. Z. said he thought theirs had rotted from so much rain. He got theirs planted before we got ours out.

John has gone to take his music lesson this morning. The recital is to be next week. He got to play on Johnson’s new piano while we were there and of course kept busy at Ruth’s a good bit of the time.

It is time to start lunch so must get busy.
Love Mother 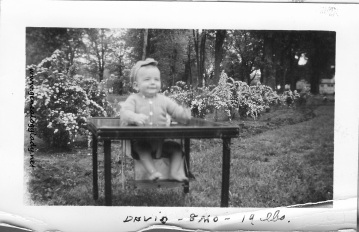