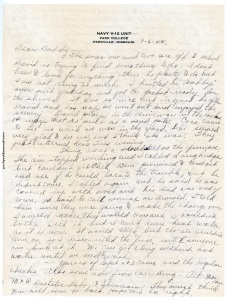 The sons one and two are off to school. David is trying to find something to do – I don’t have to look for anything – there is plenty to do, but I am not doing too much. I knitted on Bobby’s snow suit yesterday and got the jacket ready for the sleeves. It was so nice out in yard so after David had his nap we went out and enjoyed the scenery. David plays in the driveway in the rocks. He enjoys that as much as a sand pile. Coco came to see us while we were in the yard. She seemed very glad to see us, and I think she was. They just returned home Tues. evening.

Things are at a stand still on the furnace. The air stopped working and I called Loughridge but couldn’t get Chet. Bun promised to come out and see if he could locate the trouble, but he didn’t come. I called again and he said he was covered up with work and his Dad was out of town. He said to call Monroe or Arnold. I told him since they were going to make the change over I would rather they would come out. I wouldn’t bother with it but I can’t even heat water as it is now. It would click, but the air wouldn’t turn on, so I disconnected the fuse, until someone can look at it. We can get along without hot water until we need to wash.

–Yours of Sept. 2 & 3 came and the regular checks. Also some adv. from Carr Drug, Pit-Morian, M. & R. Dietetic Lab & Sherman. They must think you will soon be back. Hope they are right.

[page 2] Norma was going to town so I went along – The stores will be closed this afternoon and I wanted to get a few necessities. Tomorrow school will be out and one of the boys can go if necessary. I banked one ck. and cashed the other. Have to give the boys their allowance so we can get back on schedule.

We haven’t heard anything in the past few days about Navy releases but I think the info in the Chicago Tribune is authentic because it is the same as we heard Sat. on the radio, given out by Adm. Denfield, head of Navy Demobilization. So I think something will be done as soon as it is possible. Dolores said so many changes had to be made over night that it will (may) take a little time to get releases started. However if 11,200 is the goal for Sept. someone should be getting theirs soon. I just scanned over the Democrat and see that John Krull has been discharged. They are getting ready to open their restaurant. Also see the Paul Yost is to be discharged soon. I’ll send the papers to you and you can do your own reading. I think you will enjoy that more.

I talked to Geo. Tilton about the linoleums this morning and he is going to see about fixing them. They split the place where it is bulged – put in cement and weight it down until it dries, then it should stay – and he says shows no mark.

Lucile just called ma and said she was going to cancel her appointment with Dr. Ade next week. She was to take Jimmy down for allergy tests – he has not been so good the past week and she thinks the trips down and the tests would be too hard on him now – I told her too, to wait a while because Dr. Y would probably have an outfit like that and she could get it done right here. She agreed that it would be much easier.

As you advised me, keep your chin up and I love you, 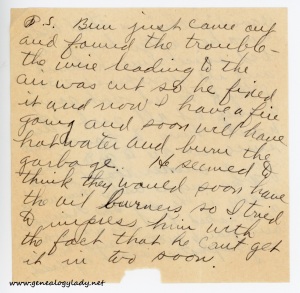 P.S. Bun just came out and found the trouble – the wire leading to the air was cut so he fixed it and now I have a fire going and soon will have hot water and burn the garbage. He seemed to think they would soon have the oil burners, so I tried to impress him with the fact that he can’t get it in too soon.

David “Anthy” is still wide awake after being in bed since lunch time and it’s now past 2:30. I think he is not going to sleep at all and I did want him to have a nap since we are to go to Funks for a wiener roast tonite. When anyone asks him where Daddy is he says San Franciko. Coco asked him who was who in our group picture and he was very emphatic about, “my daddy.”

1 thought on “The Furnace (Gladys)”