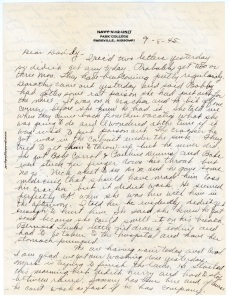 I rec’d two letters yesterday so didn’t get any today. Probably get two or three Mon. They have been coming pretty regularly. Dorothy came out yesterday and said Bobby had gotten some rat poison she had put out for the mice. It was on a cracker and he bit off one corner before she knew he had it. She told me when they came back from their vacation what she was going to do and I wondered at the time if it was wise to put poison out. The cracker he got was in the cabinet under the sink. They tried to get him to throw-up but he never did. She got Babe Carrol & Pauline Dennis and Babe even stuck her finger down his throat but “no go.” Nick went to see Dr. M. and he gave some medicine that should have made him “toss his cracker” but it didn’t work. He seemed perfectly OK when she was here with him in the afternoon. I told her he evidently didn’t get enough to hurt him. She said she knew he got some because she could smell it on his breath. Bernard Funk’s little girl drank iodine and had to be taken to the hospital and have her stomach pumped.

We are having rain today and cool. I am glad we got our washing done yesterday. Mark is trying to finish the lawn. He started this morning but didn’t hurry and had to stop between rains. Sammy has been here and of course he can’t work as fast if he has company.

[page 2] Mark went to the fair with Zells yesterday afternoon. They stayed until late – saw the stage show. John didn’t go out and I didn’t either. I couldn’t get up any enthusiasm about any part of it.

Had another letter from Jim. It was written Aug. 19 and he didn’t seem to know the war was over. He said they dropped anchor near an island not long ago (before Aug. 19) and picked up a letter from me. Maybe by now he knows. Don’t they have radios on ships and don’t they keep up on the latest?

Uncle Wes & Aunt J. plan to come back Wed. and be here for dinner. Aunt J. sent me a card. Mom had received the picture of D. I sent for her birthday.

We listened to a Comdr. Crum on a radio program today. Thought he might give out something but it was all about Army discharges. However, he promised the points for Navy overseas duty will be given out soon. He said it would probably be ¼ point for each month, which will give you about 5. He invited anyone to write him on any questions they have and he will answer. He said this is a free country so feel free to ask. Anything you want to know. If I thought I would find out anything I would write the big question in our minds.

Dr. Hungess is gone on a month’s vacation and Irene changed the baby’s feeding this week. She put him on S.W.A. Maybe he told her to do that if he didn’t get along – but he is past 2 months old now – I would think a little advanced for that type of feeding.

Mark is waiting to take this –
So Love Mother

5 thoughts on “Toss His Cracker (Gladys)”