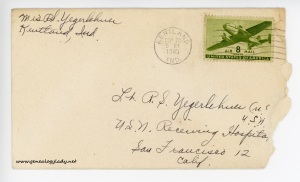 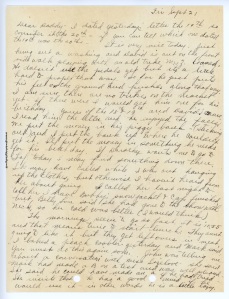 I dated yesterday’s letter the 19th so consider it the 20th – if you can tell which one dated the 19th was the 20ths. It is very nice today. Just hung out a washing and David is out on the front sidewalk playing with an old trike Mrs. Z. loaned. He doesn’t use the pedals yet but it’s a little hard to propel that way. So far he just puts his feet on the ground and pushes along that way. I am sure there are no trikes on the market yet – If there were I would get him one for his birthday. Yours of the 18th & 19th and David’s came. I read him the letter and he enjoyed the faces. We put the money in his piggy bank – (sticking out) and I put the bank up where he couldn’t get it. I’ll put the money in something he needs for his birthday. If Dorothy wants me to go to Laf. today I may find something down there. She may have called while I was out hanging up the clothes, but otherwise I haven’t heard from her about going. I called her last night to tell her I have Bobby’s snow jacket & cap finished but Betty Lou said she had gone to the show with Nick, so her cold was better (I would think).

The mornings seem to go so fast. It is 10:55 and that means time to start lunch. They aren’t going to like it but they get leftovers in meat. I baked a peach cobbler yesterday and Mark said, “You must do this again soon.” John was telling me about a conversation with Miss Sizelove – she said Mark had made a B on a test and was well pleased. She said he could have made an A if he had tried. She insists that he has a good mind, if he would use it – in other words, he is a little lazy. 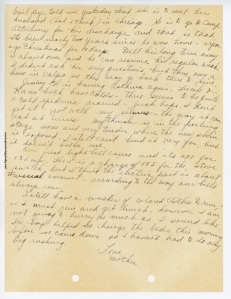 [page 2] Gail Dye told me yesterday that she is to meet her husband (Sat. I think) in Chicago. He is to go to Camp Atterbury for his discharge and that it that. It’s been nearly two years since he was home – a year ago Christmas for 10 days. Well his long term away is about over and he can resume his regular work. I didn’t ask her any questions, but they own a home in Valpo so they may go back there to live.

Jimmy Ed is having asthma again. Lucile & Karen both have colds – there seems to be quite a cold epidemic around – just hope I don’t get it – not with my sinus – the way it can act at times. My thumb is in the peeling stage now and very tender where the new skin is exposed. I still can’t bend it very far, but it doesn’t bother me.

Our first light bill came and it $2.91 for 13 days. There is a charge of $1.95 for the stove switch but I think the electric part is about the usual amount – according to the way our bills always run.

I still have a washer of colored clothes to run, so I must run and get lunch – however I am not going to hurry as much as I sound like. The boys helped me change the beds this morning before we came down so I haven’t had to do any big rushing.

1 thought on “You Must Do This Again Soon (Gladys)”