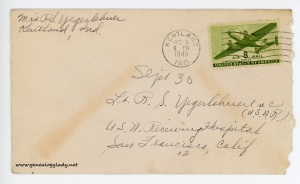 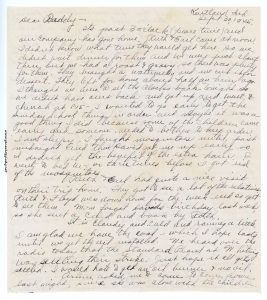 It’s past 3 o’clock (peace time) and our company has gone home. Ruth & Earl came at noon. I didn’t know what time they would get here so we didn’t wait dinner for them and we were just about thru but we had a roast & gravy so there was plenty for them. They brought a watermelon and we cut it for dessert. They left for home about half an hour ago. I thought we were to set the clocks back tonight so we didn’t have ours back and got up and went to church at 8:15 – I wanted to go early to get the Sunday School things in order and maybe it was a good thing I did because some of the children came early and someone needed to be there to keep order. I am sleepy – I fought mosquitoes until past midnight and then David got me up early so I didn’t get the benefit of the extra hour. I went to bed two or three times before I got rid of the mosquitoes.

Ruth & Earl had quite a nice visit on their trip home. They got to see a lot of the relatives. Ruth & Floyd were down home for the week-end so got to see them. Mom forgot David’s birthday last week, so she sent a card and book by Ruth.

It is cloudy and cold and raining a little. I am glad we have the coal – which I hope lasts until we get the oil installed. We heard over the radio today that the Standard Plant at Whiting was settling their strike. Just hope it all gets settled. I would hate to get an oil burner & no oil.

Arlene asked me to come to come down last night, since she was alone with the children.

[page 2] Her “maid” is still with her. She married Shorty Davis but he lives in a trailer and I imagine she would just as soon work some place as stay in a trailer all day. She hasn’t said anything about leaving Arlene and Arlene is planning to go up to the lodge for a week and leave the children with Francis. John Funk was at the lodge working for Bill and he got sick and Bill had to go up so he wants Arlene to go up there for a week. Arlene was down to see Dr. Cole Fri. and said she invited the Coles to the lodge for a vacation. She said after she extended the invitation she thought about Rosemary who is due to go to the hospital anytime. She didn’t want to withdraw the invitation and she didn’t want to take the Dr. away from Rosemary. Arlene also told me that Bernard’s baby had been in the hospital 10 days under Van Buskirk’s care and that they had brought him home and are going to take him to Cole now – they aren’t satisfied with his condition. He still has a rattle – he almost had pneumonia.

Mrs. Mathews asked me as we were leaving church when you were coming home. She said she was hoping you would get home before winter.

David is full of pep this afternoon. He wants to push chairs around and has his little chair going around in circles. He has a hard time when he has to stay in.

Mon. morn – Yours of Sept. 26 came today but yours of the 27 came Sat. so I don’t feel like I have the latest news. Maybe the next one will be in this evening. I’ll go see when I mail this. Still raining and raining. At least it is warmer and that is something. Clarence Simmons came to see me this morning. He wanted to know if you wanted to get “out” and if so they need a Dr. in Mulberry & they would get the Procurement Board to let you come there.