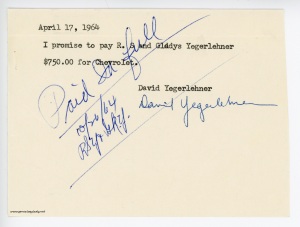 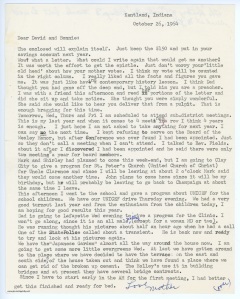 The enclosed will explain itself. Just keep the $150 and put in your savings account next year.

Wow! What a letter. What could I write again that would get me another? It was worth the effort to get the epistle. Just don’t worry your ‘little old head’ about how your mother votes. I think my vote will be counted in the right column. I really liked all the facts and figures you gave me. It was just like having a contemporary history lesson. I think Dad thought you had gone off the deep end, but I told him you are a preacher. I was with a friend this afternoon and read her portions of the letter and did she sit up and take notice. She thought you were simply wonderful. She said she would like to hear you deliver that from a pulpit. That is enough bragging for this time.

Tomorrow, Wed., Thurs. and Fri. I am scheduled to attend sub-district meetings. This is my last year and when it comes to 4 meetings in a row I think 4 years is enough. I just hope I am not asked to take anything for next year. I can say no the next time. I kept refusing to serve on the Board of the Wesley Manor, but after conference was over found I had been appointed. Just so they don’t call a meeting when I can’t attend. I talked to Rev. Fields about if after I discovered I had been appointed and he said there were only two meetings a year for board members.

Mark and Shirley had planned to come this weekend, but I am going to Clay City to give a program for St. Peter’s Church (United Church of Christ) for Uncle Clarence and since I will be leaving at about 2 o’clock Mark said they would come another time. John plans to come home since it will be my birthday, but he will probably be leaving to go back to Champaign at about the same time I leave.

This afternoon I went to the school and gave a program about UNICEF for the school children. We have our UNICEF drive Thursday evening. We had a very good turnout last year and from the enthusiasm from the children today, I am hoping for good results this year.

Dad is going to Lafayette Wed. evening to give a program for the Clinic. I won’t go along, since it is an all male meeting (except for a woman MD or two). He was running through his pictures about half an hour ago when he had a call. One of the State Police called about a transient. He is back now and ready to try and look at his pictures again. 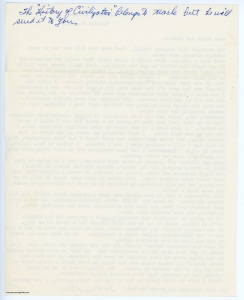 We have the “Japanese Garden” almost all the way around the house now. I am going to get some more little evergreens Wed. At last we have gotten around to the place where we have decided to have the terrace on the east and south sides of the house taken out and think we have found a place where can get rid of the broken up cement. The Holleys use it in building bridges and at present they have several bridge contracts.

Since I have to start early in the AM for the first meeting, I had better get this finished and ready for bed.

The “History of Civilization” belongs to Mark but he will send it to you.

2 thoughts on “Enclosed Will Explain Itself”