We went to Champaign for a long weekend. Dad was MD for freshman team at Champaign and Purdue’s freshman team really lost, but the big team won by a large score. We had tickets for the Saturday game. We picked up our little Japanese friend – (the one we sat by on the plane coming from Tokyo to LA, in August – she is on the staff at U of I for a year – then she will go back to Tokyo – she is studying and working at U of I) on Friday evening and took her out to Lea and Bob’s place for dinner. The family all had gifts for me and a cake which was a little early, but I unwrapped gifts and when we explained that it was my birthday, she gave me a gift she had brought along – which we couldn’t decide whether she had originally meant for me or for Lea – but at any rate it was a very beautiful Christmas tree ornament – a ball wound with several different colors and very beautiful designs made by the different colors and the way the threads were interlaced.

Tomorrow after Dad gets off at the S. H. C. we are going to Kentland to get the key to the office. Dr. Imperial had moved to his new office building. We have offered the building for sale to the people who live across the street, the Johnsons and also to Sid Lee who owns the apartment house on the corner next to the office. Just hope one of them decided to buy the place, because we don’t want to be bothered with it. It would cost too much to make it into a dwelling, or two apartments and it would require too much attention from 42 miles.

We plan to go to Mark’s next Sunday. We had wanted to go there Oct. 19th for Kirk’s birthday, but had something going on at church – after an extensive campaign – we raised $170,000.00 for 1970 budget. They were shooting for $140, but were very happy about the $107, and when you consider the last time pledges were made a year and a half ago, only 86 thousand was pledged. I think the $107 should look good.

I know the Bylers are in New York – as the missionaries we met in Karachi said, he was kicked upstairs. Just wish he could help me get some money for a little girl in Penang Louise introduced to us. She is trying to get a scholarship to study in Jackson, Tenn., at Lambuth College for 4 years. I did some inquiring when we came back and was directed to Miss Margaret Swift in the Crusade Division, but so far we haven’t gotten very far. If you can be of any help tell me what to do. 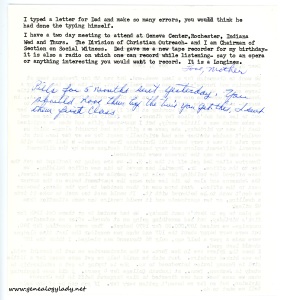 [page 2] I typed a letter for Dad and made so many errors, you would think he had done the typing himself.

I have a two day meeting to attend at Geneva Center, Rochester, Indiana, Wed. and Thurs. The Division of Christian Outreach – and I am Chairman of Section on Social Witness. Dad gave me a new tape recorder for my birthday – it is also a radio on which one can record while listening – say to an opera or anything interesting you would want to record. It is a Longines.

Pills for 5 months sent yesterday. You should have them by the time you get this. I sent them first class.