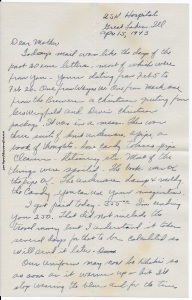 Today’s mail was like the days of the past 20 some letters – most of which were from you – yours dating from Feb. 5 to Feb. 26. One from Wayne W., one from Mark, one from the Brewers, a Christmas greeting from Geo. Wingfield and Dave’s Christmas package. It was in a mess. There was three suits of knit underware, a pipe, a book of thoughts, some candy tobacco, pipe cleaners, stationary, etc. Most of the things were spoiled. The book was OK, the pipe OK, the underware damp & moldy, the candy – you can use your imagination.

I got paid today – $355.00. I’m sending you $250. That did not include the travel money but I understand it takes several days for that to be calculated so will send it later. Our 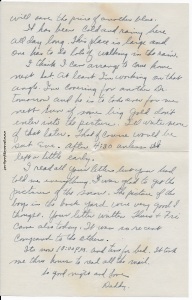 [page 2] will save the price of another blue.

It has been cold and rainy here all day long. This place is large and one has to do lots of walking in the rain.

I think I can arrange to come home next Sat. At least I’m working on that angle. I’m covering for another Dr. tomorrow and he is to take over for me next Sun., if some big Gold don’t enter into the picture. I’ll write more of that later. That of course would be Sat. eve after 4:30 unless I left a little early.

I read all your letters but you had told me everything. I was glad to get the pictures of the snow. The picture of the boys in the back yard were very good I thought. Your letter written Thurs. & Fri. came also today. It was so recent compared to the others.

It’s now 10:00 PM and time for bed. It took me three hours to read all the mail/
So goodnight and Love
Daddy 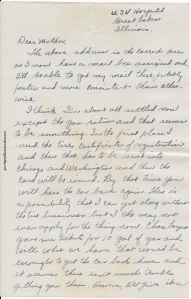 The above address is the correct one as I now have a mail box assigned and I’ll be able to get my mail there probably faster and more consistent than otherwise.

I think I’m about all settled now except the gas ration and that seems to be something. In the first place I need the tire certificate of registration and then that has to be sent into Chicago and Washington and then the card will be issued. By that time you will have the car back again. There is a possibility that I can get along without the tire business but I the may not even apply for the thing now. Chas. Largent gave me tickets for 10 gal. of gas and with what we have that would be enough to get the car back home and it seems there isn’t much trouble getting gas there. However, I’ll give it a

[page 2] think. It isn’t hardly worth while asking you to send that registration because you can bring it when Joe comes up or I can get it if I come down. I’m going to start working on the coming down about tomorrow and after work tomorrow eve I’m planning on going house looking.

It was about 5 PM when I left the hospital this PM so thought I would see if I could find Socky. With his address I was able to get his Barrack number and I drove up in front and asked about where Wilson might be and was informed that he was at chow. I just sat in the car and along came Socky. When he saw me he yelled “Hi Doc.” The first part of his yell was very loud but it tapered off to a whisper and he walked up – stood at attention and saluted. Then when no one was looking we both laughed. His barrack is very near that first large building on the left as you approach the station. His hands were a bluish color from the dye in the clothes he had washed. He said they had to drill pretty hard today – running and sprinting around the drill field. He was very glad to see me – said he was homesick. All

[page 3] in all he was very military. So much for Socky.

We got breakfast and lunch at the base – 25₵ per and it is checked from our pay. I guess we could get supper there but I haven’t tried as yet.

I’ll get paid some tomorrow but I won’t get the mileage until later. I’m not sure just how much I’ll be able to draw but will try to send some home.

Tomorrow is official day for white cap covers and I’m a little mixed up as to whether or not we can wear khaki. If not, I’ll have to buy another blue suit or grey whatever it might be but this I know I’m going slow on any buying of uniforms.

Since leaving home I’ve spent $1.17 – Two evening meals and 10₵ for a car badge – Haven’t even paid my room rent. She would not take it last night and she isn’t here tonight. 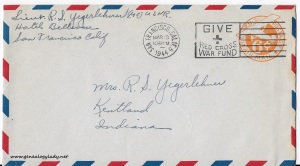 Still no further news so it’s wait again for another day – hope this doesn’t keep up too long and I really think it will be, as I told you before, the first of the week before anything definite turns up.

It seems I’m having a little trouble drawing money I have on the books so if I write a check for transportation home and there isn’t enough to cover same have Teague honor the amount and I’ll take care of it then. Just telling you in case something like that does happen.

Of course if I get orders to some area place in the 9th district my fare will be paid or at least I’ll be repaid after getting there. Hope that 9th district deal 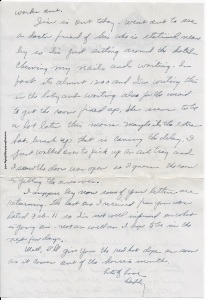 Jim is out today – went out to see a doctor friend of his who is stationed nearby so I’m just sitting around the hotel chewing my nails and waiting. In fact it’s almost 1200 and I’m writing this in the lobby and waiting also for the maid to get the room fixed up. She seems to be a lot later this morn. Maybe it’s the extra Sat. brush up that is causing the delay. I just walked over to pick up an ash tray and I saw the door was open so I guess the room is getting the once over.

I suppose by now some of your letters are returning. The last one I received from you was dated Feb. 11 so I’m not well informed on what is going on – not as well as I hope to be in the next few days.

Well, I’ll give you the red hot dope as soon as it comes out of the horse’s mouth.
Lots of Love
Daddy 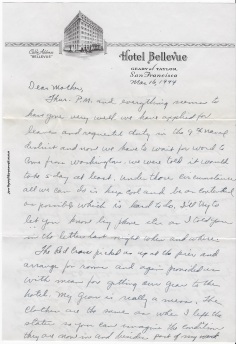 Thur. P.M. and everything seems to have gone very well – we have applied for leave and requested duty in the 9th Naval district and now we have to wait for word to come from Washington – we were told it would take 5 day at least. Under those circumstance all we can do is keep cool and be as contented as possible which is hard to do. I’ll try to let you know by phone, etc., as I told you in the letter last night when and where.

The Red Cross picked us up at the pier and arranged for rooms and again provided us with means for getting our gear to the hotel. My gear is really a mess. The clothes are the same as when I left the states so you can imagine the condition they are now in and besides part of my ward 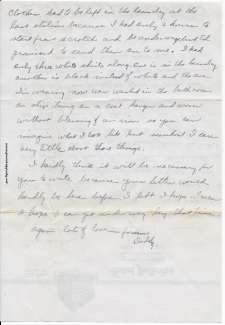 [page 2] clothes had to be left in the laundry at the last station because I had only 2 hours to start from scratch and be underway but Ed promised to send them on to me. I had only three white shirts along. One is in the laundry, another is black instead of white and the one I’m wearing now was washed in the bathroom on ship, hung on a coat hanger and worn without blessing of an iron so you can imagine what I look like but somehow I care very little about those things.

I hardly think it will be necessary for you to write because your letter would hardly be here before I left I hope. I mean I hope I can get underway by that time.

Again lots of love
From Daddy