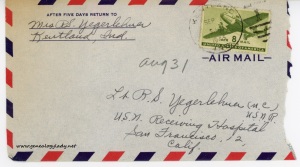 We had quite an electrical storm last night and it’s beginning to blow this evening. The lightning and thunder kept me awake until after 2 o’clock. I would just get to sleep, when bang a crash of thunder would awaken me. I felt a little dragged out this a.m. I am sleep now, so think I’ll turn in pretty soon. Lucile called me today and said Jimmy was so bad last night he couldn’t sleep. They were up with him all night. I told her if she wanted to go someplace with him I would keep Karen. She said they would wait now since the season is so near over. I think the people who go away come back about the second week in Sept. Angus is to come back Sept. 8. Lucile had me buy a toy lamb for Jimmy today and I stopped to leave it when we came home. She had all the doors and windows closed and fans going. Jimmy was lying on the studio couch. Karen was raising a howl, but Lucile just lets her howl. She wants her eats when it’s time and it was just past 6 PM. Now John’s glasses are taken care of. He is to get them one day next week. We took David along and he was a little “dinker.” We bought Donnie Funk a birthday gift – and David could hardly wait to take it to him this evening. We missed his birthday by two days but he was very pleased to get something. Little Joy is growing up as rough & tumble as the boys. She is so short – much shorter than David and

[page 2] she would run up to David and push him. We measured David & Donnie and David is as tall as Donnie but much lighter. David would soon learn the art of self preservation if he played with those children. They are a lively lot.

The town seems to be going for Bendix laundrys. Nick & Dorothy said they were to get the first and today Arlene says they have one ordered. Bill took Arlene’s washing machine to the Lodge and now she is without one. Coke Foulkes tried to get a B. right after the war started but couldn’t so I suppose she will be ready for one soon. All of those people could have had one when we got ours. In some ways we are smart, eh what?

Mark went with the Washburns to the Fairgrounds this evening for a little while. I suppose they were taking things out for display. John says he doesn’t care to go at all. I don’t either and certainly don’t intend to take David.

John talked to Smith today about changing his course and carrying two solids he wants to take – (Latin instead of Geography). He would have to take Latin every other class & English likewise, because Jr. Latin & Soph. English meet at the same time. Smith said no – John says he knows he could do it. I wish you could have contacted Smith that day you & John went over there. Maybe you could have helped to iron things out. John is going to play the oboe for band and piano for the Glee Club.

You rec’d a bulletin from the U. of Buffalo on Postgraduates Course for Practitioners – Sept. 24 & 29. You also rec’d some adv. from Cole Chem. Co. on Derfule, etc., etc. Those companies are not going to miss an opportunity if they can help it. Seems good tho, to get things thru the mail for Dr. Y.

I’ll finish my letter on this. Yours of Aug. 29 came today. We heard some good news this afternoon. Adm. Denfeld – head of demobilizing the Navy talked on a program. He said 11,000 officers would be released in Sept. – I wonder if you will be in the first group??? At any rate so many more will be released

each month – the number to be increased every month and by Navy Day in Oct. a huge figure. 24,000 is the goal for Dec. Those are some of the figures I caught. Maybe you heard that broadcast too. It’s logical to assume that as the force is decreased the Drs. will be too. Had a letter from Ruthie Y. They haven’t gotten their apt. yet, but living in a room at

the Methodist minister’s home. She went to Dr. Kizer for a check-up. He said not so much any one thing as a number of things – low blood count – low blood pressure. He is giving her medicine and she is to rest every day. Her chest hurt so they made an Xray 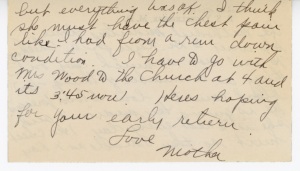 but everything was OK. I think she must have the chest pain like I had from a run down condition. I have to go with Mrs. Wood to the church at 4 and it’s 3:45 now. Here’s hoping for your early return