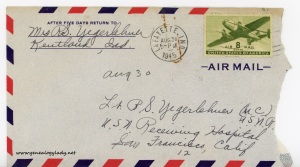 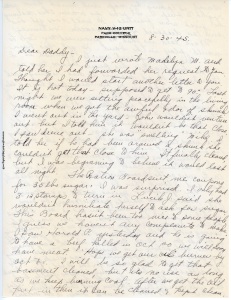 I just wrote Madelyn M. and told her I had forwarded her request to you. Thought I would start another letter to you. It is hot today – supposed to get to 90°. Last night we were sitting peacefully in the living room when we got the awful odor of skunk. I went out in the yard – John wouldn’t venture out – but I told him it wouldn’t be that close. I saw Irene out – she was smelling “Mike.” I told her if he had been around a skunk she couldn’t get that close to him. It finally cleared, but I was beginning to believe it would last all night.

The Ration Board sent me coupons for 35 lbs. sugar. I was surprised. I only had 3 -13 stamps to turn in. Lucile J. said she wouldn’t humiliate herself to ask for sugar. This Board hasn’t been too nice to some people. I guess we haven’t any complaints to make. I saw Harold P. yesterday and he is going to have a beef killed killed in Oct. so we will soon have meat. Hope we get our oil burner by Oct., too. I will be so glad to get that basement cleaned, but it’s no use as long as we keep burning coal. After we get the oil put in then it can be cleaned & kept clean. [page 2] David is taking his nap and must have gone right to sleep. It was so warm this morning he just wore panties. He will soon get his sun tan deepened if this weather continues.

Mark told us that he promised Mr. Cole he would play in the band. He got his horn out this morning and wants to polish it. I made him practice his piano lesson, two or three times. He at present is out riding with Sammy Washburn on his bike (each boy on a bike).

The news about the Navy is good we think. I just wonder if after they get Japan signed, they will start demobilizing rather rapidly. We heard a lot about the subject last night. Of course, every time we hear anything coming on a newscast concerning the subject we sh everyone so we won’t miss a word.

Arlene was picking flowers this morning to take to the Country Club. The Funks (Wm.) and Casts were on the decorating committee. It’s celebrity day and I think there is a dinner tonight.

Fri. afternoon – Yours posted 27 & 28 came. You should have David’s picture (& ours) by now. The gold made good time if you got it Mon. I didn’t mail it until Sat. afternoon. I am waiting for the car. Sondergraths are working on it. Something wrong with the distributor. I am taking John back to Dr. Ade for recheck. Maybe he should have gone on the bus, but school is in session and it takes so long to go on the bus. The appointment was made for today by the office girl when I called for the first appointment. They do that as routine. Jimmy Ed was pretty bad last night. They were up with him all night. Also there was an electircal storm and that didn’t help matters any. It’s hot & humid today.