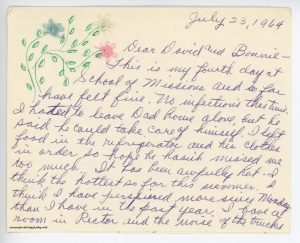 This is my fourth day at School of Missions and so far have felt fine. No infections this time. I hated to leave Dad home along, but he said he could take care of himself. I left food in the refrigerator and his clothes in order so hope he hasn’t missed me too much. It has been awfully hot – I think the hottest so far this summer. I think I have perspired more since Monday than I have in the past year. I have a room in Rector and the noise of the trucks

[page 2] has not bothered me. I was asked to be a Secretary for one of the classes – which makes me do a little extra work, but since this is really a vacation I don’t mind. Just wish Dad could take off for a week, but I know he doesn’t want to take a vacation until we can really get away for a month later on. I called on Sam Kirk this afternoon after one of my clinic meetings – and after one of his. He sends you his best wishes. Please excuse the lack of paragraphs in this but it is easier to do it this way. John arrived in the States Sunday. He stopped in Chicago long enough to call us, but since he was on his way to N.Y. we didn’t see him. He called me here yesterday

[page 3] and said the man he was to see in N.Y. wasn’t in so he flew to Bloomington and is visiting friends there. He is coming on the Monon tomorrow (1:14) and since our session ends at 11:30 I will have time to pack and eat lunch before I pick him up. I don’t know whether Dad knows John didn’t remain in N.Y. If not, he might be surprised to see me bringing him home – Just went for a ride. Mrs. Kathryn Jackson (her parents used to live in Kentland and her father owned the Bank – Mr. Teague) lives in Chesterton and wanted to give her car an airing. We saw the cultural center of Indiana (That’s a joke, son) I had heard 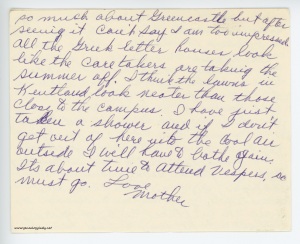 [page 4] so much about Greencastle but after seeing it can’t say I am too impressed. All the Greek letter house look like the caretakers are taking the summer off. I think the lawns in Kentland look neater than those close to the campus. I have just taken a shower and if I don’t get out of here into the cool air outside I will have to bathe again. It’s about time to attend Vespers, so must go.