Another wintry Sunday P.M. I was going to take David out for a walk but a fine snow is coming down – so fine it is almost a rain, so unless it lets up we will stay in or go in the car. I thought we might go out to the greenhouse. Rev. McCloud died yesterday and I would like to send flowers. Rev. McCloud suffered a heart attack last week and I understood he would have to be in bed for sometime but he was up getting his breakfast yesterday morning when he died. As active as he had always been I never thought about him having heart trouble. He used to play tennis every summer –

The snowing stopped so I walked for a while with David & Mark then we came back and went out to the green house and ordered flowers to send to McClouds. Then we stopped at Plummers. Mr. P. was in bed – had been sick with near pneumonia. They won’t get to go to Fla., because they were to go about the time he got sick a week ago, and he isn’t able to be up yet. I think Mrs. P. is rather disappointed because they can’t go. She has been working pretty hard since he has been down, taking care of the chickens, furnace, etc. Then they got a quarter of beef and she canned it. I hadn’t seen her since Christmas eve and didn’t know about Mr. P. being ill. I thought

[page 2] they would be in Fla., but saw the flowers in the window so knew they were home.

We came back home and listened to the radio all evening. David Diedam came about 7 P.M. and played with Mark a while. Mrs. Z. came over and invited us to eat fried chicken with them tomorrow evening. They have kept chicken in their refrigerator since the middle of Jan. We had baked chicken today that we put in the locker almost a year ago.

Mon. A.M. Yours of Feb. 8 & 9 came today. Had a leak in the upstairs bathroom. Had to call Mr. Monroe – The leak was from the flush box. It had run out on the floor and soaked down on the ceiling in the dining room before I discovered it but it is fixed now and not much damage done. The other side of the dining room ceiling has water marks from the bath tub. I hope to get some painting done this spring & cover the water marks.

It is nice out today. Sun shining and snow melting. I want to take David out after he wakes from his nap. He was a little busy body this morning. Wouldn’t stay put anyplace – just kept going from one thing to another, getting into things he knows he should stay out of. He is beginning to talk more. When he wants to do something to get attention, he gets your picture and says “Da.” He knows he won’t get scolded

[page 3] for that. He has been saying Ma-Ma the last two days. We are trying to get him to say mother. He can say John & Mark, not quite plain, but we know what he is saying. I have to keep the bathroom door closed (downstairs) to keep him from playing at the lavatory. He climbs up on the clothes hamper and does things.

Irene borrowed some coffee this morning – Said her mother is away but I didn’t ask any questions. I suppose she has gone to Ft. Wayne to stay with Margaret. Irene isn’t working now – Dorothy said Irene was to rest a month before she goes back to work. I can’t imagine Irene staying home and doing hum drum house work. Not that it is that to me – but I am geared differently from Irene. I imagine she will return to the factory.

I have been wondering what the men getting married in foreign lands will do about their wives when they are ordered back to the States. Will Bob be able to bring his bride back with him if he is sent back here before the war is over? He won’t mind staying down there now but what a situation to be ordered back here soon and have to leave his wife. Of course it isn’t any worse than your situation but it would seem a little ironical if he got traveling orders now when that is what you want. I think I hear little David getting awake.

[page 4] I knitted a suit for James L. – I want to get it mailed today. I wanted to send it for his birthday which was in Jan., but I didn’t get it started in time. I made this suit in dark blue. I want to make one for David in red. He still has dark brown hair and his eyes are so dark they almost look black, so he should wear red. D. & Jimmy make a good contrast. Jimmy is so fair and his hair is so blond it is almost white.

–Pause to take D. up and set him on the toidey – it worked – saved a diaper. He is busy now playing with a box – much more interesting than a toy – Toys are something to throw down and leave on the floor while a good box is playing with.

I am afraid this letter has been rather jumbled, but I started on it so many times & I didn’t have a very good train of thoughts any time I started.

I want to start planning flower gardens for spring. I haven’t thought much yet about a vegetable garden. It is nice to have vegetables all summer but almost more work than I care about. If the boys could carry on without my supervision, but they couldn’t last year. John doesn’t like gardening and Mark won’t work consistently unless he has someone with him all the time – It is almost compared to getting blood out of a turnip – except that he can work but doesn’t care to. 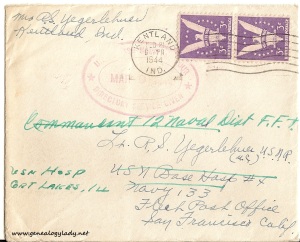