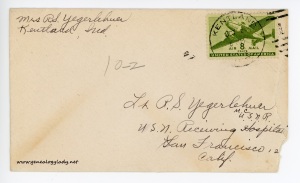 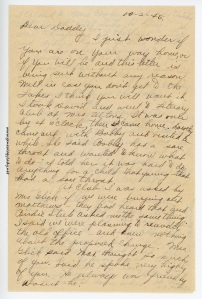 I just wonder if you are on your way home, or if you will be and this letter is being sent without any reason. Well in case you don’t get to the Lakes I think you will want it. I took David and went to Literary Club at Mrs. Tilton’s. It was over by 4 o’clock, then we came home. Dorothy came out with Bobby and visited a while. She said Bobby has a sore throat and wanted to know what to do – I told her it was hard to do anything for a child that young – that had a sore throat.

At Club, I was asked by Mrs. Glick if we were buying out Mathews – they had heard that and Birdie Steele asked me the same thing. I said we were planning to remodel the old office – and knew nothing about the proposed change. Mrs. Glick said Max thought so much of you. Said he spoke very highly of you. He always was friendly, wasn’t he? 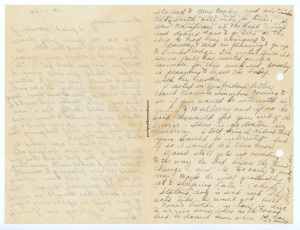 [page 2] I talked to Mrs. Coaley and she thinks Ellsworth will soon be home. He was transferred at the last minute and didn’t have to go out on the ship he had been assigned to.

Dorothy & Nick are planning to go up to Funk’s lodge Friday until Tuesday. It seems Bill has invited quite a number for this weekend. Dorothy is planning to leave the baby with her mother.

David still gets up according to the way he did before the time change and it’s too early to suit me. Maybe he will gradually get to sleeping later – (I hope).

Staton’s dog is sick and he acts like he won’t get well. Coco’s brother-in-law is due to arrive somewhere on the coast but he doesn’t know where. He has 57 points.

[page 3] Ed has moved across the street so our office is ready to be remodeled.