Rec’d two letters today – the latest one posted Nov 9 – Hope they keep coming like this – I am glad to get them but rather get one each day than in bunches. This afternoon when I was taking David for his airing noticed men working in the Chevrolet building and unless I was mistaken we are going to have a new post office – all new features, etc. I hadn’t heard anything about it or read anything in the papers about it, but I could have missed it. I haven’t done much reading and don’t always read the paper thoroughly. As I have said before – and as you are getting tired of reading, I am pretty busy, and haven’t done much reading since the event of David. After I get housecleaning done maybe I can catch up a little on my literary duties. You remember the Mrs. Morris I visited in Norfolk? Mrs. Swartz told me her son is in Peru now at the Navy Air School. Now I could comment but I am sure you know what I am thinking – but no use going into that. John had to go to band practice again tonite and Mark went with him. They got back just after Fibber & Molly program started. I am listening with one ear and it isn’t so easy to 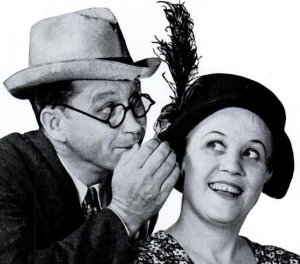 Yesterday when I was in town saw Shirley Boze and she looked like she needs an O.B. Dr. again. This afternoon saw Lucile Burgee and she was the same – very definitely so. Two cases you would probably have had.

The boys raked some leaves and burned them in the furnace outside. The wind blew a small mountain of leaves over the terrace and I was afraid they would smother the grass. It looked like rain and if there had been a heavy rain on them would have made matters worse. This wind I have been writing about swept the rest of the back yard clean but the wind has ceased at present.

There isn’t any school tomorrow due to students working on the gas rationing, so the boys will be home. I want to get the furnace cleaned good and the clinkers carried out, and a few other things done, as I think of them. Seems like there is always something to be done but as I have said it better to keep busy.

Just read your last two letters over again – and I’ll tell you again in case – I bought each boy a bond. John got his books full and it made Mark feel so badly I had him clean the floors and finished his books so he could get a bond and David had rec’d 9⁰⁰ in gifts so put the difference to a bond for him.

[page 3] Again I’ll tell you – it took the V-mail you sent the boys 3 weeks to come. They have each written you V-mail several times but you haven’t mention receiving.

I sent Lentz’s pictures and the film in your birthday box. Maybe you have some by now. The picture you mentioned surely wasn’t good. I noticed there were several blanks on the film. All his pictures are in the bunch. The only ones I kept were of you. I hope you get all the snap shots I have sent of us. There were some good ones of the baby. I sent several this week – some week we took last week. I have a new roll of film and if there is any sunshine tomorrow will try to get on of David. He will be 8 weeks old tomorrow. He weighed 8-14 this morning so by tomorrow he should be a little heavier. Maybe 9 lbs for his 8th week. We have been home 6 weeks and he has gained about 2 lbs – 11 oz – which is almost an average of ½ lb a week. His face is getting so full and is [his] legs and arms are showing some curves. He measures 22 inches long so when he gets a few pounds added will be an armful.

Wed Afternoon – It is almost time for the 2 P.M. feeding but will try to finish this first. It seems like I am so pokey I can’t get much done. David is still asleep. He has been very good today – but that is the usual thing – He weighed 9 lbs this morning and that was what

John has an eye headache today. He will see Dr. A Sat. and get a check-up. His head bothered him quite a lot this morning – so I gave him an aspirgum to chew – there was a box of samples came thru the mail. It relieved him some but his head is still touchy. Mark has gone with Betty Lou up to the stable. He enjoys being around the horses. He is talking about ice skates for Christmas. I don’t know what the outcome will be.

Had a letter from your Mother this morning. She had gotten your last letter. I suppose it was your last to her – the one you mentioned in the last I had from you. I didn’t get any today but suppose will get two tomorrow. They have been coming rather regular – day by day for some time now. You said you had the bank bal. I don’t remember what it was then but right at 700 now. I haven’t spent anything this fall only what I had to. Somehow I don’t feel much like buying things. I am going to buy two bonds this mo. and two next. I missed Sept & Oct so will catch up.

This is a beautiful warm sunny day. Unusual weather again,