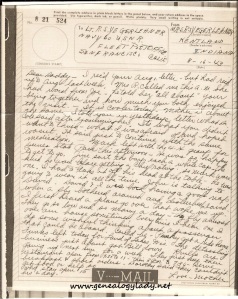 Dear Daddy – I rec’d your Aug. 1 letter – but had rec’d up to Aug. 6 last week. Mrs. R. called me this a.m. She had word from Joe – he told her “all about” your being together and how much you both enjoyed the visit. – It is cooler today – Mother is about the same. I told you in yesterday’s letter what Dr. Cole said after examining her. It’s what you didn’t want to think – what I was afraid of and hoped wasn’t. He said just to continue with the same medication. – Mark left with the 4-H group for Dunes State Park this afternoon – He was so happy to get to go. Jim sent the boys each a white cap – the kind he wore before getting a chief rating – so Mark wore one. I had to take it off his head at the table – he was going to wear it all the time. John is talking to David. David & I were both having a good nap when a fly bothered around and disturbed David. I first heard a plane go over that woke me up. They go so low and so many a day – they fly almost over our house sometimes. Every time I hear one I do some wishful thinking about a passenger that could be aboard. Could be – Pinky got a ride home. Funks left today for Land of Lakes, Wis. The detassling business just about got Bill down. Krulls are going up next Sun. for a week. They just keep their restaurant open from 7:30 to 11 – then 3 p.m. to 7:30 – serve breakfast & short orders – Dorothy said they couldn’t get food or help so why stay open 15 hrs. a day.

James L. Foster in his sailor uniform (but not with the white cap). Photograph courtesy of Gerry McCarroll.