We had quite an exciting afternoon. The Nu-Joy Restaurant burned to the ground. The fire started in the kitchen and the fire Dept. wasn’t called soon enough, so the story goes. All the fire trucks around here came but about all the good they did was to keep the garage from burning and the Kentland Café building. John & Gladys are back and getting their place ready to open. I suppose they will step up their work to get opened sooner now that the Nu-Joy is gone. The Harlan Parrs were in town and had come out this way so they took David and me down. J. & M. were already down watching the fire. We parked by Childress Station and watched a while, then I asked them to take be back home. There was such a mob gathering I thought I would rather be home. Traffic had to be re-routed out this way to 24. There were cars parked on 24 out past here. Ed J. took John out for another driving lesson this evening and he told John what the Electric Co. had to do when they knew how the fire was going. Ed was on the scene most of the time – until after the fire was really over. I could see smoke for a long time.

Jimmy Ed is much better. I took David and stayed there while John & Ed were driving. Jimmy seems normal. Lucile says he chokes up some at night, but while we were there I didn’t notice any signs of hay fever or asthma. Maybe what was bothering him a week ago is gone now.

Joe Bill Mullen was in church this

[page 2] with Gloria Blanke and his mother. He has to go back to the hospital for more treatment. I have heard there is to be a wedding, but I don’t know when.

The Foulkes were entertaining dinner guests at the Nu-Joy when the fire started. I think they left before they had finished eating. No one was caught in the fire but Katie told me all they could get out was the money. I heard later that some other things were saved – some 5ths. One fireman was supposed to have taken 3 cases of beer.

Olene Miller says Emmett wrote her not to send him any more packages, so she things he will soon be coming home.

Lila called me tonight. She said Joe is still in N. Africa. He got his promotion so is now Comdr. She doesn’t know anything about when he will get home and wondered if you knew anything.

Mrs. Glick was at church this a.m. She asked me how soon you were coming home. I told her I didn’t know. Dr. G. seemed to think it would be soon, or something to that effect.

I got the boys started back on their regular monthly allowance again. Mrs. Koon came out Sat. and paid the bal. of the rent $15.00 – so that helps out the petty cash fund.

We were up late last night so in order to get the boys settled down early will go to bed myself. Lucile came out late last night to show us Karen’s pictures. She stayed until 11:30. I made a pot of coffee and we ate some of John’s prize cake he baked yesterday morning. 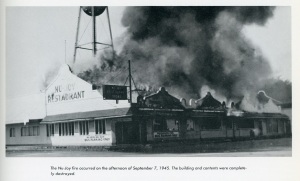 Photograph of the Nu-Joy fire, from the Kentland-Newton County Centennial, 1860-1960. Note the incorrect date!

[Editor’s note: A newspaper clipping regarding the Nu-Joy fire can be found here. Note that both Gladys and the newspaper give the date of the fire as Sunday, September 9, 1945, not September 7th as printed in the centennial book.]