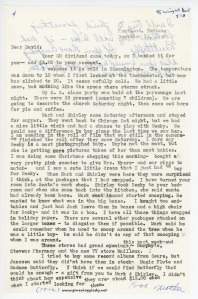 I suppose it is cold in Bloomington. The temperature was down to 10 when I first looked at the thermometer, but now has climbed to 20. It seems awfully cold. We had a little snow, but nothing like the areas where storms stuck.

My S.S. class party was held at the parsonage last night. There were 33 present (counting 7 children). We are going to decorate the church Saturday night, then come out here for pie and coffee.

Mark and Shirley came Saturday afternoon and stayed for supper. They went back to Chicago Sat. night, but we had a nice little visit and had a chance to play with Becky. We could see a difference in her since the last time we saw her. I am sending in the roll of film that was still in the camera – we finished the roll after they came Saturday. I dare say Becky is a most photographed baby. Maybe not the most, but she is getting more pictures taken of her than most babies. I was going some Christmas shopping this morning – bought a very pretty pink sweater to give Mrs. Myers – and ear rings to match – and I saw a cute little dress that I just had to buy for Becky. When Mark and Shirley were here they were surprised I think, at the packages that I had wrapped. I have turned your room into Santa’s work shop. Shirley took Becky to your bedroom and when she came back into the kitchen, she said Santa had already been here. Mark went in and started snooping. He wanted to know what was in the big boxes. I bought two end tables and just had Jack leave them in boxes and a high chair for Becky – and it was in a box. I have all those things wrapped in holiday paper. There are several other packages stacked on the larger boxes – to disguise them if possible. Mark said he could remember when he used to snoop around the tree when he was a little boy – he said he didn’t do any of that snooping when I was around.

I tried to buy some record albums from Sears, but Janssen said they didn’t have them in stock – Magic Flute and Madame Butterfly. I think if we could find Butterfly that would be enough – a gift from you to Mark & Shirley. I didn’t think about how expensive they are – about $12.00 each when I started looking for them. 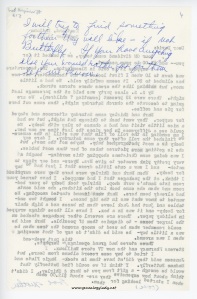 I will try to find something for them they will like – if not Butterfly. If you have anything else you would rather get for them let me know.