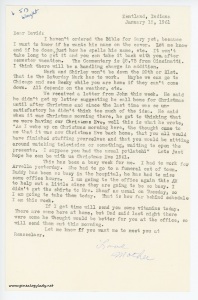 I haven’t ordered the Bible for Gary yet, because I want to know if he wants his name on the cover. Let me know and if he does, just how he spells his name, etc. It won’t take long to get it and you can take it back with you after semester vacation. The Commentary is $8.75 from Cincinnatti. I think there will be a handling charge in addition.

Mark and Shirley won’t be down the 20th or 21st. That is the Saturday Mark has to work. Maybe we can go to Chicago and see Becky while you are home if they can’t come down. All depends on the weather, etc.

We received a letter from John this week. He said he didn’t get my letter suggesting he call home for Christmas until after Christmas and since the last time was so unsatisfactory he didn’t think too much of the idea. He said when it was Christmas morning there, he got to thinking that we were having our Christmas Eve, well this is what he wrote, “As I woke up on Christmas morning here, the thought came to me that it was now Christmas Eve back home, that you all would have finished stuffing yourselves and that you would be sitting around watching television or something, waiting to open the presents. I suppose you had the usual potlatch?” Let’s just hope he can be with us Christmas Eve 1961.

This has been a busy week for me. I had to work for Arvella yesterday. She had to go to a funeral out of town. Daddy has been so busy in the hospital, he has had to miss some office hours. I am going to the office again this AM to help out a little since they are going to be so busy. I didn’t get the shirts to Mrs. Shoaf as usual on Tuesday, so I am going to take them today. That is how far behind schedule I am this week.

If I get time will send you some vitamins today. There are some here at home, but Dad said last night there were some he thought would be better for you at the office, so will send them out this morning.

Let me know if you want me to meet you at Rensselaer.
Love Mother

1 thought on “Far Behind Schedule”