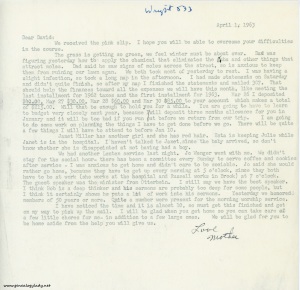 We received the pink slip. I hope you will be able to overcome your difficulties in the course.

The grass is getting so green, we feel winter must be about over. Dad was figuring yesterday how to apply the chemical that eliminates the grubs and other things that attract moles. Dad said he saw signs of moles across the street, so is anxious to keep them from ruining our lawn again. We both took most of yesterday to rest. I was having a slight infection, so took a long nap in the afternoon. I had made statements on Saturday and didn’t quite finish, so after my nap I finished the statements and mailed 307. That should help the finances toward all the expenses we will have this month, like meeting the last installment for 1962 taxes and the first installment for 1963. March 26 I deposited $40.00, March 27 $30.00, March 28 $60.00, and March 30 $85.00 to your account which makes a total of $215.00. Will that be enough to hold you for a while? You are going to have to learn to budget very closely next year, because I will deposit three months allowance for you in January and it will be too bad if you run out before we return from our trip. I am going to do some work on planning the things I have to get done before we go. There will be quite a few things I will have to attend to before January 10.

Janet Miller has another girl and she has red hair. Esta is keeping Julie while Janet is in the hospital. I haven’t talked to Janet since the baby arrived, so don’t know whether she is disappointed at not having had a boy.

We had another Lenten service last night. Jo Wenger went with me. We didn’t stay for the social hour – there has been a committee every Sunday to serve coffee and cookies after service – I was anxious to get home and didn’t care to be sociable. Jo said she would rather go home, because they have to get up every morning at 5 o’clock, since they both have to be at work (she works at the hospital and Russell works in Brook) at 7 o’clock. The guest speaker was the minister from Otterbein. I still say we have the best speaker. I think Bob is a deep thinker and his sermons are probably too deep for some people, but I think it certainly show he puts a lot of work into his sermons. Yesterday we honored members of 50 years or more. Quite a number were present for the morning worship service.

I have noticed the time and it is almost 10, so must get this finished and get on my way to pick up the mail. I will be glad when you get home so you can take care of a few little chores for me – in addition to a few large ones. We will be glad for you to be home aside from the help you will give us.