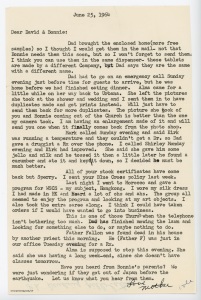 Dad brought the enclosed home (more free samples) so I thought I would get them in the mail – not that Bonnie needs them this soon, but so I won’t forget to send them. I think you can use them in the same dispenser – these tablets are made by a different company, but Dad says they are the same with a different name.

Dad had to go on an emergency call Sunday evening just before time for guests to arrive, but he was home before we had finished eating dinner. Alma came for a little while on her way back to Urbana. She left the pictures she took at the shower and wedding and I sent them in to have duplicates made and got prints instead. Will just have to send them back for more duplicates. The pictures she took of you and Bonnie coming out of the Church is better than the one my camera took. I am having an enlargement made of it and will send you one when it finally comes back from the photo shop.

Mark called Sunday evening and said Kirk was running a temperature and they couldn’t get a Dr. so Dad gave a druggist a Rx over the phone. I called Shirley Monday evening and Kirk had improved. She said she gave him some jello and milk and he tossed it then a little later he found a cucumber and ate it and kept it down, so I decided he must be much better.

All of your stock certificates have come back but Sperry. I sent your Blue Cross policy last week.

Last night I went to Morocco and gave a program for WSCS – my subject, Hong Kong. I wore my silk dress I had made in HK and heard a lot of ohs and ahs. The group all seemed to enjoy the program and looking at my art objects. I also took the extra saree along. I think I could have taken orders if I would have wanted to go into business.

This is one of those Thursdays when the telephone isn’t bothering too much. Dad has finished mowing the lawn and looking for something else to do, or maybe nothing to do.

Father Fallon was found dead in his house by another priest this morning. He (Father F) was just in our office Tuesday evening for a Rx.

Alma is supposed to stop this evening. She said she was having a long weekend, since she doesn’t have classes tomorrow.

Have you heard from Bonnie’s parents? We were just wondering if they got out of Japan before the earthquake. Let us know what you hear from them.