It is staying at about 10 or a little above today with a strong wind, so feels much colder. I have been getting figures ready for income tax figuring. Have an appointment with a C.P.A. Saturday to have him do the final figuring. Next year we won’t have such a problem, since the income is now just about what we get from Purdue, I don’t have so much figuring or book work to do. We do have a few little items trickling in, but what comes in now won’t be hard to take care of. Had a thank-you note from Edna. She spent some time in Memphis with Betty Joe, but came back to Indiana today. She said it was much warmer there, but she thought for her own good she should come back and try to find some work. Since she has no special training, except as secretary in our office, she may have a hard time finding something. She said in Memphis her big trouble was her age. I do hope she finds something she likes. We had been paying her for working on records, so she really has not been without a pay check for very long.

We went to see Dick Van Dyke in Fitzwilly, which we did enjoy. There is a new movie house close to us and they have opened with Walt Disney’s Jungle Book. We didn’t think we would particularly care to see it, but may go just to see what it is like.

I trust you had an enjoyable visit with John. We haven’t heard from him since his return. It has been so cold here, we were wondering how he got home from the airport, or if he left his car there. We got the slides back and as soon as we get some prints made will send them. The pictures were all good, but Bonnie doesn’t look too happy in one. John gave me a record of Balinese music and the opera Parsifal. I am listening to the latter now.

One of these days I will get Bonnie’s coat sent back, but I had such a rush before Christmas I didn’t try to send it. Also since you said it wasn’t warm enough for real cold weather, I didn’t think there was any hurry. We received a calendar from Mac & Louise today. Those pictures of southeast Asia makes the cold today seem even worse. 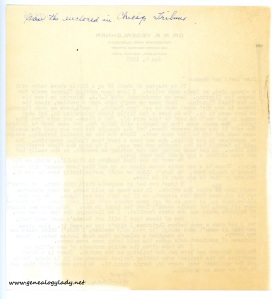 We have given the entire contents of our office to Project Concern and have put the building on the market. There is a local committee in the Kentland area backing Project Concern and it is their job to get the equipment sent where Dr. Turpin wants it. We have asked that they get it out as soon as possible.

Saw the enclosed in Chicago Tribune