Dear David and Bonnie and Debby:

I didn’t notice the enclosed letter was addressed to you until I started to read it – sorry about that, but here it is. We are always getting something from Bankers and the only thought that occurred to me was that there was only one letter – we usually get two. 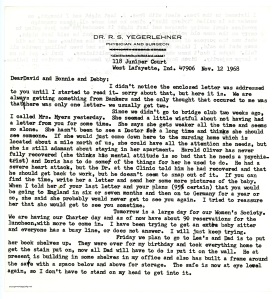 Since we didn’t go to bridge club two weeks ago, I called Mrs. Myers yesterday. She seemed a little wistful about not having had a letter from you for some time. She says she gets weaker all the time and seems so alone. She hasn’t been to see a Doctor for a long time and thinks she should see someone. If she would just come down here to the nursing home which is located about a mile north of us, she could have all the attention she needs, but she is still adamant about staying in her apartment. Harold Oliver has never fully recovered (she thinks his mental attitude is so bad that he needs a psychiatrist) and Doris has to do some of the things for her he used to do. He had a severe heart attack, but the Dr. at the clinic told him he had recovered and that he should get back to work, but he doesn’t seem to snap out of it. If you can find the time, write her a letter and send her some more pictures of the baby. When I told her of your last letter and your plans (95% certain) that you would be going to England in six or seven months and then on to Germany for a year or so, she said she probably would never get to see you again. I tried to reassure her that she would get to see you sometime.

Tomorrow is a large day for our Women’s Society. We are having our Charter day and as of now have about 90 reservations for the luncheon, with more to come in. I have been trying to get an extra baby sitter and everyone has a busy line, or does not answer. I will just keep trying.

Friday we plan to go to Lea’s and Dad is to put her book shelves up. They were over for my birthday and took everything home to get the stain put on, now all Dad will have to do is put it on the wall. He at present is building in some shelves in my office and also has built a frame around the safe with a space below and above for storage. The safe is now at eye level again, so I don’t have to stand on my heat to get into it.

[page 2] I listened to the Pres. Elect with Pres. J. last night and I thought, no wonder he is called “tricky Dick,” since he had made all those campaign promises about making changes and last night it sounded like he was just going to carry on the same old policies. If he didn’t mean what he said last night, what was the purpose of having it broadcast across the nation, and if he did mean what he said, I think he contradicted what he had been telling people all fall. Maybe I don’t know what to expect from politicians. Earl L. got in on a large majority. Birch Bayh was about the only Democrat to survive in Indiana.