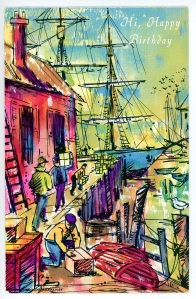 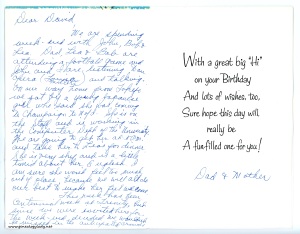 We are spending weekend with John, Bob & Lea. Dad, Lea & Bob are attending a football game and John and I are listening to an opera (Louisa Miller) and talking. On our way home from Tokyo we sat by a young Japanese girl who said she was coming to Champaign to U. of I. She is on the staff and is working in the computer dept. of the University. We are going to get her at 5 PM and take her to Lea’s for dinner. She is very shy and is a little timid about her English. I am sure she won’t feel too much out of place, because we will all do our best to make her feel welcome.

This week has been centennial week at Trinity, but since we were invited here for the weekend decided we wouldn’t be missed in the anticipated crowds

Talked to Mrs. Myers recently and the Rx Dad gave her seemed to clear her trouble, but said she didn’t feel too good generally. I think it will just be a matter of time until she will have to give up her apt. and live in a nursing home. Her hips gets gradually worse. I think she will have to be in bed in the not too distant future. She went to Lafayette sometime during the summer to see Dr. Stahl and he said her hip bone is deteriorating and there is nothing can be done about it. 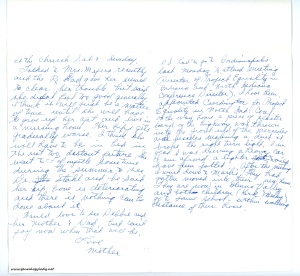 Would love to see Debbie and her Mother & Dad, but can’t say now when that will be.

P.S. had to go to Indianapolis last Monday to attend meeting (Director of Project Equality in Indiana and North Indiana Conference Director). I have been appointed Coordinator for Project Equality in North Ind. Conf. On the way home a piece of plaster board on the highway was thrown into the front end of the Mercedes and besides making a dent, it broke the right turn light. I am glad I was driving a heavy car. I am afraid a lighter car would have been jolted. After the meeting I went down to Mark’s. They had gotten moved into their new house. They are now in Glenn’s Valley and both children (Kirk & Becky) go to same school – within walking distance of their home.