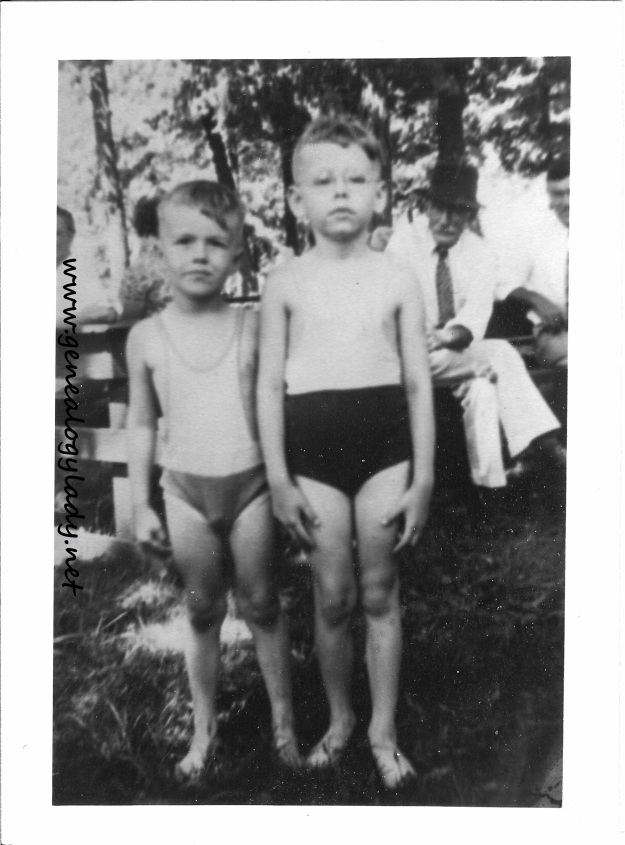 Photograph from the private collection of Deborah Sweeney. 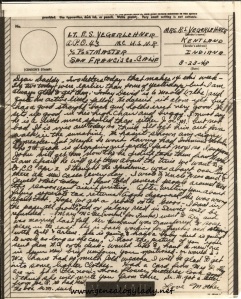 Dear Daddy – Two letters today – that makes 14 this week – The two today were earlier than some of yesterdays but I am always glad to get them. Today David is 6 mo – old (17 lbs) and quite an active little fellow. He doesn’t sit alone yet but has a good straight back and holds erect very good. He sits up good in his high chair and buggy. I must say he is a little more spoiled than either J. or M. but not bad. IT is nice out today so think I’ll get him out for a walk in the sunshine. He hasn’t shown any signs of measles but maybe he won’t having had Immune Globulin. The 7th grade is dropping out pretty fast now so I suppose John will get them now tho he didn’t take them from Mark. I am afraid he will get them about the time we want to go to C. C. Apr 2. I thought the epidemic was about over but there are new cases every day. I wrote to Uncle Wess and to Jewell & Bill today. I have told several people around town the reason you aren’t writing. After writing you about filing separate tax returns Agnes discovered she was wrong about that. Hope we get a rebate on the Gross. I saw in the paper all gross 1942 pd on salary rec’d in Service will be refunded. – Mary McGee (worked for Funks) went to Ari and was married last fall. Her husband was transferred to some place in the east. She is back working for Funks and staying with Bill & Arlene. She is going to have a baby but is going to work as long as she can. I have the picture of you you sent from N. C. on the desk – would like to have a new one in your new brief uniform you mentioned – or would I? We have had so much cold weather I will be glad to get into some lighter clothes. Had a card from Mrs. P. They are in St. P. Fla now. – Those flower pictures look good. I think she will write you from there. Dr. M. got a letter from Joe R. He had rec’d the box Dr. M. sent. 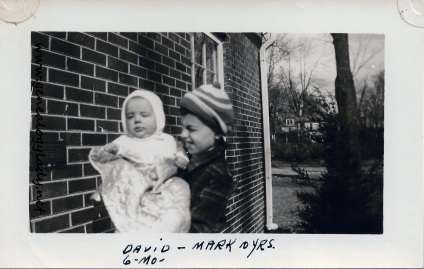 We are indebted to C.C. Yagerlehner for the following account of the death of his niece, who had moved to Akron, Ohio, a week before the tragic accident, which was the first serious accident that has ever occurred in the Yagerlehner family. Mrs. Robert [sic Roberta] Van Sickle was the oldest daughter of George F. Yagerlehner and was 26 years old. Mr. and Mrs. VanSickle with a party of friends were amusing themselves by making trips over a new giant roller coaster styled “Over the Top,” at Akron, Ohio. The men and the children had just finished a trip. The ladies had just started over the top on their trip and the car was plunging downward when a forward wheel broke, causing the car to leave the rail and plunge about 50 feet to the earth, killing three and fatally wounding several others. Burial was in Crown Hill cemetery, Indianapolis, Wednesday afternoon. Those from a distance attending the funeral were Grandmother Yagerlehner and Mr. and Mrs. John Yagerlehner from Clay City – Clay City News.

Akron, Ohio – Three persons were killed, and three fatally injured and eight seriously hurt when a train on “Over the Top” a giant roller plunged 50 feet to the ground at the local amusement park last night. The front wheels of the first car broke while making the ascent where the thriller commences. The crowd yelled in derision as the passengers frantically called for help. An infant in its mother’s arms escaped injury.

The body of Mrs. Van Sickle, who recently moved here with her husband and child will be taken to the home of her parents in Indianapolis. 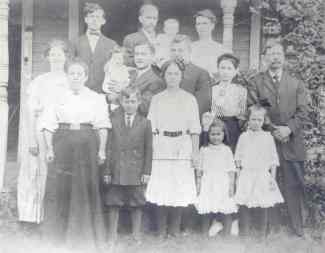 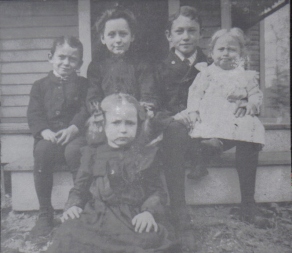 Roberta married Floyd W. Van Sickle on 17 September 1909 in Indianapolis. They had one daughter, Charlotte, who was born in 1912. Floyd was a truck driver and a mechanic. He worked with his father and brother at Vansickle and sons on Hamilton Street in Indianapolis. The reason why Floyd and Roberta moved to Akron is unknown, but the result was tragic. 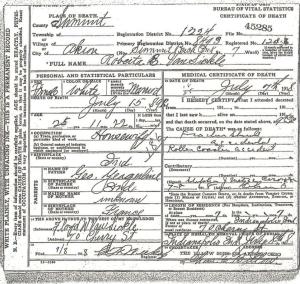 Roberta is buried at Crown Hill cemetery in Indianapolis with her parents. Floyd later remarried and is buried with his second wife.

I wrote one letter today but thought I would start another one this evening. Went to town this afternoon after I wrote to you. I kept watching the sky and decided it wasn’t going to rain. Had a nice walk – went to town and paid the telephone bill and saw several people on the streets. Everyone wanted to look at the baby. He slept thru it all. He was asleep when I took him up to put him in the buggy and slept until after we came home. He is asleep again now – He usually fusses between 6 and 10 – hope he doesn’t get his hours mixed up and want to stay awake after 10. He weighed about 8-14 this morning. He has been gaining more this last week. While he took his last bottle I re-read the two letters that came today. I suppose you do the same thing yourself. While in town I saw the Dyers & Prues – Mrs. D. said Rosemond’s husband was sent to Ireland and they are afraid he is being sent on somewhere – Mrs. Dyer said “into the thick of things.” I saw Marjory Wilson Ryan. I was rather surprised as her baby is hardly 3 weeks old and Dr. Cole tells his OB’s to stay in 3 weeks after leaving the hospital – but she is young and must have gotten along very well. That sounds like I am putting myself in the old lady class but I think you understand. I really feel good now, but I think it is because I did go slow at first.

[page 2] John was coming home from school when I started to town so he walked with me. He was rather amused at the comments – first one would say, “My, what a tiny baby,” then the next would say, “Why he isn’t small.” It is amusing to hear people and the difference of opinion. Arlene was in town too, but she has company and had gone to Club – her sister and a friend. She isn’t able to walk much so they had gone in their car. This was my first trip to town walking and I enjoyed it very much. I stopped at the dress shop and got me a new girdle – I am a little pouchy (I think) and I want to get ironed out again. I wonder if I will wear the garment – also got a new blouce. I didn’t have time to do much shopping because by the time I got to the dress shop it was getting close to bottle time.

John has gone to band practice tonight. He had to get a strap today (1⁰⁰). He said “there goes two week’s allowance.” They had to have this extra practice to get ready for their broadcast Sat. at Purdue.

The Kindig boys – Jack & Calvin are both in hospitals. Jack is in Watseka and Calvin in Michigan somewhere. I don’t know what ails either one but from comments both are very ill.

So many popular radio programs are being sent by short wave to service men overseas. I wonder when I hear the announcers tell that if you are getting the programs. Hope you can get some of your favorites. However

[page 3] you said you couldn’t get Red Skelton. I listen to news reports every day and wonder if you get the same. We get Gregor Z. from Cincinatti at 6:15 and sometimes I get him at 10:15 while giving the baby his bottle.

In one of those letters away back there before I went to the hospital I wrote you about the septic tanks. A man came around wanting to clean them. Link & I decided not to have the tanks cleaned. However Funks & Foulks did. I also wrote to Jim and he wrote back that it shouldn’t be necessary for several years yet. Jim said the only reason would be that if the plumber hooked the sink drain to the tanks which shouldn’t be done – the grease would cause trouble. I think Mr. Monroe knows enough not to have done that.

Now that you are receiving some of those back dated letters maybe they will all get to you, except some few I put regular 3¢ stamps on. I put air mail on most of them and on all after I received your letters telling me to.

In your Christmas box I put in a candy bar – let me know if it gets to you in good shape. We weren’t supposed to put in anything but hard candies. I put in everything you asked for and everything else we could think of which didn’t seem like much after it was all packed – but a shoe box doesn’t hold much and that was the size box we were permitted to use. I would like to get you a good wrist watch. Let me know if you want me to send you one.

In a previous letter I sent you Joe R. address. He would like to hear from you I know as much as you from him. The last time I saw her she was pretty worried about him.

[page 4] Again I will tell you we received the first box you sent and enjoyed it very much. I want to mount the coral & use it for a decoration for the mantle or coffee table.

Jack Byrne and Mr. Healy are now running Art’s drug store. Byrnes are living in the new addition in one of those houses close to Carl Funks.

I think I forgot to mention, I had a card from Jewell that Dot has a baby girl – Jane weighed 6-11 – same as David. Born in Oct. Her husband is in Class 1-A – Jewell said it looked bad so evidently he will have to go soon.

I am jumping around from subject to subject but just had a thought. John had been playing the “Star Spangled Banner” until I thought I would scream – that is he was working on it, then he told me he had written his version of it. Miss Smith told me she was so thrilled over it – and told him it was the best thing he had done yet. He is scoring some onion skin and is going to copy it and send to you and if you have a piano around and someone to play it – or possibly you could – maybe Lentz – you can hear what I have been listening to. You would probably appreciate it more than I did when he was working on it, because it does get a bit tiresome to hear the same thing over & over – that is when he is working out something. I will stop and leave a space for Tues A.M. Just finished the baby’s bath & bottle. He has the hiccoughs – seems to be a habit of his – but doesn’t seem to bother him much. Rec’d two letters this morn – were posted Nov. 8 and 9th. Will answer those last two when I write tonight. Thought of something else to tell you when I have more time & space so will do that tonite –