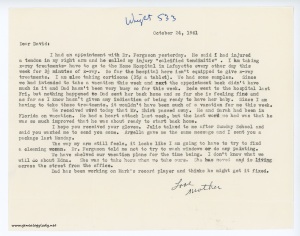 I had an appointment with Dr. Ferguson yesterday. He said I had injured a tendon in my right arm and he called my injury “calcified tendinitis.” I am taking x-ray treatments – have to go to the Home Hospital in Lafayette every other day this week for 3 ½ minutes of x-ray. So far the hospital here isn’t equipped to give x-ray treatments. I am also taking cortisone (35₵ a tablet). We had some samples. Since we had intended to take a vacation this week and next the appointment book didn’t have much in it and Dad hasn’t been very busy so far this week. Dede went to the hospital last Fri., but nothing happened so Dad sent her back home and so far she is feeling fine and as far as I know hasn’t given any indication of being ready to have her baby. Since I am having to take these treatments, it wouldn’t have been much of a vacation for me this week.

We received word today that Mr. Shirk passed away. He and Sarah had been in Florida on vacation. He had a heart attack last week, but the last word we had was that he was so much improved that he was about ready to start back home.

I hope you received your gloves. Julie talked to me after Sunday school and said you wanted me to send you some. Arvella gave me the same message and I sent you a package last Monday.

The way my arms still feels, it looks like I am going to have to try to find a cleaning woman. Dr. Ferguson told me not to try to wash windows or do any painting.

We had shelved our vacations plans for the time being. I don’t know what we will do about Edna. She was to take hers when we take ours. She has moved and is living across the street from the office.

Dad has been working on Mark’s record player and thinks he might get it fixed.