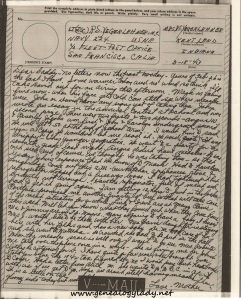 Dear Daddy – No letters now the past two day – Yours of Feb 26 is the last I have. Some warmer today and no wind so think I’ll take David out for an airing this afternoon. Mark is feeling fine now – when his face gets cold can still see where measles were. John or David show any signs yet of taking them. John wrote an essay in the annual contest at school and won second prize. There were two firsts & two seconds – Angus W. & Beverly Jacobs won first & John & Carolyn Sondergrath second. He will get $1.50 at the end of school term. I want him to send you a copy. He wouldn’t let me read it. He said (quote) “It was drippy” – This younger generation. He went to a party for the seventh grade last night. Angus didn’t have measles. He was out sick and, of course Eve thought he was taking them – so that lessons John’s exposure that we know of to Mark. Had to have Bun Loughridge come out this a.m. – our kitchen appliances stove refrigerator stopped but a fuse was loose. I had tightened it evidently not enough. Have the refrigerator full of meat and had to get it going again. I am getting 12 hens to put in the locker. Parttens promised me another quarter of beef so that will take care of the meat situation for a while. Link & Irene are at Mayo Clinic this week. Will let you know what they found out when they come home. Ma & Jimmy are in Ft. Wayne. Mary is going to have a baby I know. Mrs. J. would like to be there with her. Mrs. Davids’ daughter is staying here with her folks and has a new baby. Dr. M. took care of her and she went to Watseka – so crowded she had to be put in the hall. When the measles scare is well over I want to go see Mrs. Roberts. We talk over the phone once in a while. She is giving me her John’s clothes he outgrows for D. I have quite a few now she brought over. I told you before the 1942 tax figured $157.33. I won’t pay but have bonds to cover. Had a letter from Ruth M. She wants to go to C. C. in April with us if we get to go. Hope we aren’t still having measles then. It is a little on the gloomy side today but not cold.

The above picture of Angus D. Washburn was taken from the 1848 Kent High School yearbook.