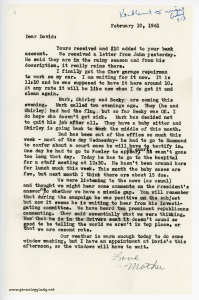 Yours received and $10 added to your bank account. We received a letter from John yesterday. He said they are in the rainy season and from his description, it really rains there.

I finally got the Chev. garage repairman to work on my car. I am waiting for it now. It is 11:10 and he was supposed to have it here around 10. At any rate it will be like new when I do get it and clean again.

Mark, Shirley and Becky are coming this evening. Mark called two evenings ago. They (he and Shirley) had had the flu, but so far Becky was OK. I do hope she doesn’t get sick. Mark has decided not to quit his job after all. They have a baby sitter and Shirley is going back to work the middle of this month.

Dad has been out of the office so much this week – most of the day Wednesday – he had to go to Hammond to confer about a court case he will have to testify in. One day he had to go to Fowler to appear in court. He wasn’t gone too long that day. Today he has to go to the hospital for a staff meeting at 12:30. He hasn’t been around here for lunch much this week. This month the baby cases are few, but next month I think there are about 15 due.

We were listening to the news (as usual) and thought we might hear some comments on the President’s answer as to whether he have a missile gap. You will remember that during the campaign he was positive on the subject but now it seems he is waiting to hear from his investigating committee. We have heard two prominent republicans commenting. They said essentially what we were thinking. Now that he is in the driver’s seat it doesn’t sound so good to be telling the world we aren’t in top place, or that we are second rate.

Our weather is warm enough today to do some window washing, but I have an appointment at Doris’s this afternoon, so the windows will have to wait.

2 thoughts on “Out of the Office”