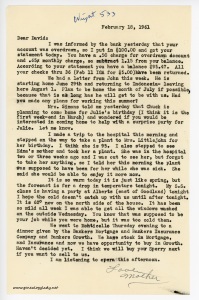 I was informed by the bank yesterday that your account was overdrawn, so I put in $100.00 and got your statement today. You have a .50 charge for overdrawn account and .65 monthly charge, so subtract $1.15 from your balance. According to your statement you have a balance of $95.47. All your checks thru 36 (Feb. 11 IGA for $5.00) have been returned.

We had a letter from John this week. He is starting home June 29th and returning to Indonesia – leaving here August 1. Plan to be home the month of July if possible, because that is as long has he will get to be with us. Had you made any plans for working this summer?

Mrs. Simons told me yesterday that Chuck is planning to come home for Julie’s birthday (I think it is the first week-end in March) and wondered if you would be interested in coming home to help with a surprise party for Julie. Let me know.

I made a trip to the hospital this morning and stopped on the way to take a plant to Mrs. Littlejohn for her birthday. I think she is 95. I also stopped to see Edna’s mother and took her a plant. She was in the hospital two or three weeks ago and I was out to see her, but forgot to take her anything, so I told her this morning the plant was supposed to have been for her while she was sick. She said she would be able to enjoy it more now.

It is so warm today it is just like spring, but the forecast is for a drop in temperature tonight. My S.S. class is having a party at Alberts (east of Goodland) tonight. I hope the cold doesn’t catch up with us until after tonight. It is 62° now on the north side of the house. It has been so mild all week I was able to get all the windows washed on the outside Wednesday. You know that was supposed to be your job while you were home, but it was too cold then.

We went to Monticello Thursday evening to a dinner given by the Bankers Mortgage and Banks Insurance Company and Bankers Growth. We have stock in Mortgage, and Insurance and now we have opportunity to buy in Growth. Haven’t decided yet. I think we will buy your Sperry next if you want to sell to us.

I am listening to opera this afternoon.
Love Mother