I talked to Dr. Logan yesterday. He explained to me about Bonnie’s difficulty – that is he told me what having a root canal meant. He seemed to think your dentist is being very expensive. Dad said he thought that was probably because everything is higher there than here.

John was home for weekend. He had been looking for his sea freight box to come, and couldn’t understand the delay. It came this a.m. It is such a large box it has to be in the garage and until we get it 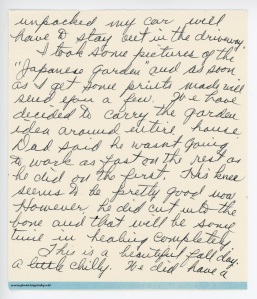 [page 2] unpacked my car will have to stay out in the driveway.

I took some pictures of the “Japanese garden” and as soon as I get some prints made will send you a few. We have decided to carry the garden idea around entire house. Dad said he wasn’t going to work as fast on the rest as he did on the first. His knee seems to be pretty good now. However, he did cut into the bone and that will be some time in healing completely.

This is a beautiful fall day. A little chilly. We did have a

[page 3] nice long lasting rain Saturday which we needed. The windows need to be washed but John J. has been too busy to get to them. I have decided to wait until we have a killing frost and maybe the flies won’t ruin his work.

I stop and see Mrs. M. about once a week. Alma Walker is going with me some day later in the fall to take Mrs. M. to shop in Lafayette. She said this would be the first time in several years you wouldn’t be here to drive and assist.

[page 4] Dad thought you should have the enclosed to read.

I am about to finish (- that is my class) the study of book Genesis – Beginnings of the Biblical Drama by Charles Kroft. By and large I think the class has gotten something out of it. My couple whose mother & mother-in-law thought the book should be burned are still coming, so I think I have made some gain with them. I will have to get something else to study in two weeks because I think we will finish this next Sunday. We had just finished Joshua when this

[page 5] Genesis book came out. I suppose we will pick up again where we left off – Judges. Several in the class have purchased the Abingdon and that helps.

Did you know you were mentioned in the last issue (Oct.) of “Together?” An article about the Mulberry St. Church in Martinsville. If you don’t have a copy, borrow one and read it.

I hope this finds you both happy in school.

1 thought on “A Beautiful Fall Day”