Yours received. Now let’s hope the weather will be fair Dec. 23.

Yesterday I went to Lafayette and bought evergreens to finish the around the house planting. I drove from Lafayette to Attica and gave a program for W.S.C.S. I showed pictures from Bali. It was guest day so a number of women were in attendance from other towns. Dad got one of the evergreens set out last night. He finished this afternoon. Last week Bill Stenz had his workmen take out the terrace. We have stone all around the house now, so no more weeds to pull. Dad is making stepping stones out of cement at the back living room door. John Janssen is here now cleaning windows. The breaking up of the cement made a lot of dust. Today we had a terrible wind most of the day but by the time John was ready to work the blowing had stopped. This afternoon we made a quick trip to Morocco to get our driver’s license renewed and the fields where corn had been but – along the fences it looked like someone had been decorating for Halloween or a fall festival – the fences were so covered with corn cuttings. It is so dry everywhere – there was a prediction for rain today but so far only wind. We have been watering the new evergreens once a week, but after this fall that shouldn’t be necessary.

I have read about the anchor Bible. The Chicago Tribune had an article about it. I took the paper to Sunday school and showed it to my class. They didn’t seem too impressed, but after reading about it I was quite interested.

I am hoping the whole family will be home for Christmas. Don’t worry about sleeping arrangements – as suggested we can use the motel. If I could find some air mattresses I would make a dorm in the living room.

I have been invited to a shower for Patricia (Cookie) Franklin, who is to be married to Jerry Carlson Dec. 8. I can’t attend the shower since 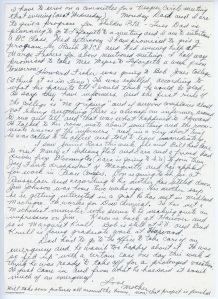 [page 2] I have to serve on a committee for a vesper circle meeting that evening (next Wednesday). Monday Dad and I are to give a program for Sheldon P.T.A. – Tues. Dad is planning to go to Lafayette to a meeting and I am to entertain a BC class. Wed. afternoon I have promised to give a program for Raub W.S.C.S. and Wed. evening help at Marge Fisher’s for above mentioned meeting. I half way promised to take Mrs. Myers to Lafayette a week from tomorrow.

Howard Fisher was going to Bob Jones College (I think it is in Tenn.) He was expelled. According to what his parents tell I would think he would be glad. He says they have informers and the first rule of the college is “no griping” and if anyone complains about not liking anything there is always an informer around to run and tell and that was what happened to Howard. He talked to his roommate about something and the roommate was one of the “informers” and in a very short time he was called to the office and told to leave immediately.

I saw Janice Ross this week. She and Bill had been to visit Nancy at Indiana State and Sara and a friend had driven from Bloomington (Sara is going to I.U.) to join them. Joy Funk dropped out of Marquette and has applied for work in Peace Corps. Don is going to St. Joe at Rensselaer and according to his mother has settled down. Jim Johnson was home two weeks ago. His mother says he is getting interested in a girl he has met in Midland Michigan. He works for Dow chemical. He has met a Methodist minister who seems to be making quite an impression on Jim. Karen is back at Hanover and so is Margaret Krull. Bob is still at I.U. and Bud Krull is doing graduate work at Harvard.

Dad had to go to the office to take care of an emergency and he wasn’t too happy about it. He as so “fed up” with a certain case one day this week I think he was ready to take off for a prolonged vacation. He just came in and from what he has said it wasn’t much of an emergency.

Will take some pictures all around the house, now that project is finished.