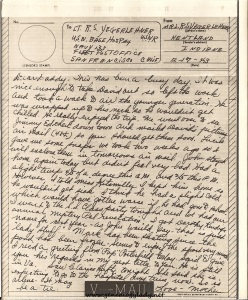 Dear Daddy – This has been a busy day. It was nice enough to take David out so left the work and took a walk to air the younger generation. He was wrapped up to his neck so he wouldn’t get chilled. He really enjoyed the trip. We went over to see Jimmy Ed then down town and mailed David’s pictures air mail (48₵) so you should get them soon. Lucile gave me some snaps we took two weeks ago so I will enclose them in tomorrow’s air mail. John stayed home again today but didn’t feel very bed. Had a slight temp 4/5 of a degree this a.m. and 2/5 this p.m. However, I told Miss Kitsmiller I kept him home so he wouldn’t get sick. I think he had a slight cold which would have gotten worse if he had gone to school. I went to the S.S. Class party tonight and we had our annual mystery pal revelation. I got Dorothy Kindig’s name for next year – as John would say – that is just “lady stuff.” Mark had been skating since the pond has been frozen. Seems to enjoy the sport very much. I rec’d a greeting from “Pop” Porterfield today. Said to give you his regards in my next letter to you. He is still in Va. Saw Clarice Hufty tonight. She said she is expecting to go to the hospital any time now. So is Arlene. It may be a tie. 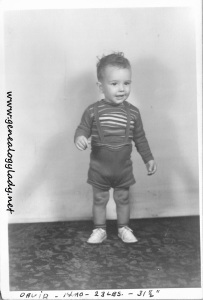 Your air mail written Sept. 27 came yesterday and as you might imagine there wasn’t much news in it because it was almost one month in getting here. However, one always appreciates letters regardless of how old.

There goes that word appreciate again – The more I thought of yesterday’s letter – the one I wrote – the dumber it seemed but I can’t see how or what I can write unless I go off on a tangent like that because vital news of each day’s happenings are not available – yes I’ve wrote that same old excuse so often it’s trite by now. I guess repeating that is a form of topics sorta pleading for sympathy. And every human at some point or another wants sympathy in one form or another. How on earth did I get started on sympathy? Must have been something in the diet.

In yesterday’s letter you said something about Reed Walker wishing I was there. I wonder what

[page 2] his trouble might be – my mind sure does roam, because you wrote in another letter saying he was going with Mrs. Jack Kindig – maybe he needs an over haul on the organs of internal combustion preparatory to an all out assault. That could be classed in the realm of smutty, nasty or catty depending upon the view point. Poor Reed, and how about that “little Devil.” I don’t mind the Devil but he could have left the little off. Once when Adm. Halsey, as the story goes, was walking along the deck of a ship heard a sailor say “There goes that old S.B. – “ where upon The Adm. Turned and said “Who says I’m old.” It’s time for the laugh now.

It seems all I’m doing now is throwing the “Bull” and someone has said that in this era of meat shortage many people would be sufficiently nourished if they swallowed their own “Bull.” Sounds good in theory but practically I’m afraid it wouldn’t stick to the ribs as most “Bull” don’t stick to anything unless its real instead of fictitious and on ad infinitum.

Mark, David & I came to Laf. with Alma Walker. She was on an errand for Les Ford & I had the chance to come with her. We stopped at the Hospital then she took me to Dr. Cole’s office. He gave David his smallpox vaccination and me an examination. Said my trouble was digestive and thought the pressure at present is the cause. After I got thru there Alma brought me back to the hospital & Mother seemed so low I thought I had better stay so Mark & I stayed & Alma & Juanita (Toole) Parr took David home. (Juanita was along too.) Alma is going to bring our car down this evening to get Mark & I. I thought Mother was about as weak as she could be before but today she dozes off every few minutes and sleeps then when she wakes up thinks it has been a long time. When I left to go to Dr. Cole’s I told her I was going to get something from Dr. Cole for Glenn. He gave me two prescriptions, ephedrine & amatol. When I came back, she thought it was the next day & wanted to know if the medicine helped Glen. Her eyes are beginning to look queer & protruding. Glen is feeling rather bad – He is so chocked up – I hope this medicine will help. He seemed to be pretty good until Thurs. eve. He went out into the garden & dug potatoes and there were a lot of weeds around – That may have made him get this attack. Alma was telling me what you gave Billy & said you had him inhale tincture Benzine. Glen smokes a powder – I am going to ask him if he ever tried inhaling steam.

[page 2]  Mark has gone to the café down the street to get his supper. Alma got a sandwich for me to eat but when Mark comes back I am going to go get something more substantial. I need something hot.

I don’t feel very newsy but just happened to think about something – Alma told me Reed is going with Dorothy Kindig (You know Jack died some time ago). I think it’s really serious & Jimmy can’t get used to the idea of Reed having any interest in anyone else. He is so used to Reed taking him places he wants to go when Reed go calling on Dorothy. I said I thought Dorothy deserved a break & Alma says there are glad R. is going with her.

Sister Celerita just stopped in to say goodbye – she is being sent someplace else but doesn’t know where. She has been on this floor a week. I was hoping she could stay – She wants me to write to her. I don’t know whether you remember her but she is very young & friendly. She was in O.B. three years ago.

I must get this finished so I can get a bite to eat & something hot to drink. You know how well I like hot tea – or do you remember – We are quite tea drinkers in the evening – The boys still have their milk at mealtimes however so the tea habit isn’t too bad.