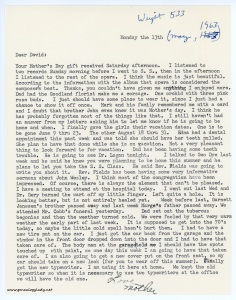 Your Mother’s Day gift received Saturday afternoon. I listened to two records Sunday morning before I went to Sunday school, then in the afternoon I listened to the rest of the opera. I think the music is just beautiful. According to the information with the album that opera is considered the composer’s best. Thanks, you couldn’t have given me anything I enjoyed more. Dad had the Goodland florist make me a corsage. One orchid with three pink rose buds. I just should have some place to wear it, since I just had a chance to show it off once. Mark and his family remembered me with a card and I doubt that brother John even knew it was Mother’s day. I think he has probably forgotten most of the things like that. I still haven’t had an answer from my letters asking him to let me know if he is going to be home and when. I finally gave the girls their vacation dates. One is to be gone June 9 thru 23. The other August 18 thru 31. Edna had a dental appointment this past week and was told she should have her teeth pulled. She plan[s] to have that done while she is on vacation. Not a very pleasant thing to look forward to for vacation. Dad has been having some teeth trouble. He is going to see Dr. Logan tonight. I talked to Geo. Dye last week and he said he knew you were planning to be home this summer and he plans to let you take the Sunday school class. He said Rev. Fields was going to write you about it. Rev. Fields has been having some very informative sermons about John Wesley. I think most of the congregation have been impressed. Of course, there is always the element that can’t be pleased. I have a meeting to attend at the hospital today. I went out last Wednesday and Dr. Gery burned the wart off my little finger. Left quite a hole. It is looking better, but is not entirely healed yet. Week before last, Garnett Janssen’s brother passed away and last week Marge’s father passed away. We attended Mr. Cobb’s funeral yesterday. Dad set out the tuberous begonias and then the weather turned cold. We were fooled by that very warm weather the early part of last week. It is supposed to get into the 70’s today, so maybe the little cold spell hasn’t hurt them. I had to have a new tire put on the car. I just got the car back from the garage and the window in the front door dropped down into the door and I had to have that taken care of. The body man at the garage told me I should have the spots touched up with paint, so one day this week I am going to have that taken care of. I am also going to get a new cover put on the front seat, so my car should take on a new look (for you to wear off this summer). Finally got the new typewriter. I am using it here at home. We kept the old typewriter so when it is necessary to use two typewriters at the office we will have the old one.