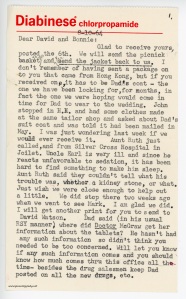 Glad to receive yours, posted the 6th. We will send the picnick basket to you and you send the jacket back to us. I don’t remember of having sent a package on to you that came from Hong Kong, but if you received one, it has to be Dad’s coat – the one we have been looking for, for months, in fact the one we were hoping would come in time for Dad to wear to the wedding. John stopped in H.K. and had some clothes made at the same tailor shop and asked about Dad’s suit coat and was told it had been mailed in May. I was just wondering last week if we would ever receive it. Aunt Ruth just called, and from Silver Cross Hospital in Joilet. Uncle Earl is very ill and since he reacts unfavorable to sedation, it has been hard to find something to make him sleep. Aunt Ruth said they couldn’t tell what his trouble was, whether a kidney stone, or what. Just wish we were close enough to help out a little. We did stop there two weeks ago when we went to see Mark. I am glad we did. I will get another print for you to send to David Watson. Dad said (in his usual RSY manner) where did Doctor McGraw get her information about the tablets? He hasn’t had any such information so didn’t think you needed to be too concerned. Will let you know if any such information comes and you should know how much come thru this office all the time – besides the drug salesmen keep Dad posted on all the new drugs, etc. 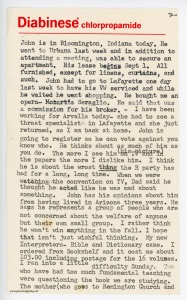 [page 2] John is in Bloomington, Indiana today. He went to Urbana last week and in addition to attending a meeting, was able to secure an apartment. His lease begins Sept. 1. All furnished, except for linens, curtains, and such. John had to go to Lafayette one day last week to have his VW serviced and while he waited he went shopping. He bought me an opera – Mozart’s Seraglio. He said that was a commission for his broker. – I have been working for Arvella today – she had to see a throat specialist in Lafayette and she just returned, so I am back at home. John is going to register so he can vote against you know who. He thinks about as much of him as you do. The more I see him (his picture) on TV and in the papers the more I dislike him. I think he is about the worst thing the R party has had for a long, long time. When we were watching the convention on TV, Dad said he thought he acted like he was mad about something. John has his opinions about him from having lived in Arizona three years. He says he represents a group of people who are not concerned about the welfare of anyone but their own small group. I rather think he won’t win anything in the fall. I hope that isn’t just wishful thinking. My new Interpreters Bible and Dictionary came. I ordered from Bookshelf and it cost me about $103.00 including postage for the 16 volumes. I ran into a little difficulty Sunday. Two who have had too much fundamental teaching were questioning the book we are studying. The mother (who goes to Remington church and 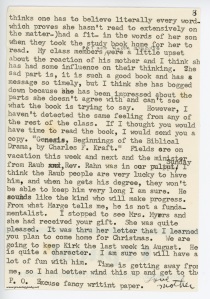 [page 3] thinks one has to believe literally every word – which proves she hasn’t read too extensively on the matter – ) had a fit – in the words of her son when they took the study book home for her to read. My class members, Pat and Keith Alberts, were a little upset about the reaction of his mother and I think she has had some influence on their thinking. The sad part is, it is such a good book and has a message so timely, but I think she has bogged down because she has been impressed about the parts she doesn’t agree with and can’t see what the book is trying to say. However, I haven’t detected the same feeling from any of the rest of the class. If I thought you would have time to read the book, I would send you a copy. Genesis, Beginnings of the Biblical Drama by Charles F. Kraft. Fields are on vacation this week and next and the minister from Raub, Rev. Rahn was in our pulpit Sunday. I think the Raub people are very lucky to have him, and when he gets his degree, they won’t be able to keep him very long I am sure. He sounds like the kind who will make progress. From what Marge tells me, he is not a fundamentalist. I stopped to see Mrs. Myers and she had received your gift. She was quite pleased. It was thru her letter that I learned you plan to come home for Christmas. We are going to keep Kirk the last week in August. He is quite a character. I am sure we will have a lot of fun with him. Time is getting away from me, so I had better wind this up and get to the P.O. Excuse fancy writing paper.

To read more about the presidential election of 1964 and Barry Goldwater, click here.

1 thought on “Uncle Earl is Ill”