Note the two dates the P.O. censor board etc., don’t seem to work on New Years’ so I have combined the two. There of course wasn’t much to write about on either day for one is about the same as the other but it seems I’ve written that many times before. You could even say I’ve heard that song before.

Tomorrow should be a good mail day because it’s been ever so long now (it seems) since mail came this way.

Had a little reunion today when Ed. Lentz came walking in to be one of our fellow workers. You remember he and I came into the Navy on the same day way back there at Norfolk – we had some conversation. He had heard from Mrs. E. and all her old gang are gone except the “very nice” man. I really don’t know how long ago he had that word from her.

My room is just off the “Rumpus” room and there are several officers in there talking about prison hangings and deaths in general,

[page 2] gas chambers, shooting and stuff. A very interesting and thrilling conversation. I just get little parts of the stories now and then a few of the “wise cracks” that some how manage to make the stories a little more listenable.

I’ve been some little time up to now writing this letter but had a lot of competition – first the stories I referred to earlier and then a couple came in the room to shoot the breeze and stuff.

Our New Years’ dinner was about the same as Christmas only not just as much “dog” or I mean turkey. I’m getting all mixed up. I guess it was turkey. Then for this Eve. meal we had hamburger. Just a little change wouldn’t you say?

As I told you a few days ago my resolution to write will have to start now. I mean to other people – I owe Ruth M. & Y. a letter each, Wayne W. and ever so many I just hate to think of everyone I must write. Maybe I can write each a short v-mail, and that reminds me I never did write you that v-mail but I promise – 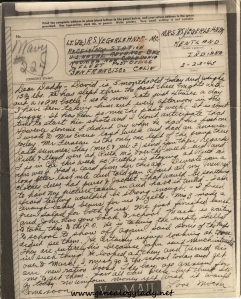 Dear Daddy – David is 5 months old today and weighs 15 ½ lbs. He has slept thru the past three nights without a 10 PM bottle – so he now eats just 4 times a day. I have been taking him out every afternoon in his buggy. It has been so nice the past week. It is about time to start his shots and I don’t anticipate that However Donnie F. didn’t cry when he had his first one. I wrote to Mrs Evans last week and had an answer today. Mr. Ferneau is the only one left of the group there last summer. They (Mrs E. & Mr F) send you their regards. Ruth & Floyd were at Ruth M’s over the week-end and F. is in Chi this week so Ruthie is staying at Ruth M’s this week. Had a card from her this a.m. – I wrote you a long letter last nite and told you about all my new red clothes, dress, hat, purse & jacket. That would be something to have my picture taken in and have it tinted. I am afraid tinting wouldn’t be strong enough. I fixed enough baked beans for us & Zells – Mrs. Z made a green salad for both of us. We just finished lunch and John has gone back to school Mark is waiting to take this to the P.O. He is taking the empty shells to school to show off again. Said some of the kids didn’t see them. He certainly enjoys looking at those. They are entirely his because John isn’t much interested in such things. He looked at them and turned his over to Mark. I must go to the school today and get our new ration books. The boys are anxious for me to get them. Have all this week but think I’ll go today. No uniform money yet. Wish it would come soon. 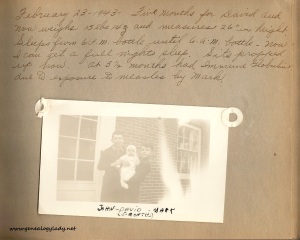 December 21, 1942 Envelope (Notice the postmark appears to be November)

Mon noon – I missed writing yesterday – seemed like I couldn’t get around to it – being Sun I should have managed but I was a little on the tired order from Sat. and tried to sleep in the afternoon while David slept, and last night I went to Funk’s to a party. I had started to Clara Moulter’s in the morning to ask her to stay with the children and met Bob & Dorothy (Vanscoryck) Schurtter. They asked me where I was going and I told them. They said Bob would stay with the children and I must have looked at them funny because they said he stays with Zells’ children sometimes when they go out, so I said, “O.K.” and that would keep Stevie for them sometime. They still live up at Kent. He said he used to take care for children while in college to help pay his expenses. I am going

[page 2] to the band concert tonight and Clara is coming to stay with the baby. He goes to sleep after his 6 P.M. bottle and doesn’t wake up until we take him upstairs to bed. Most of the time I have to wake him at 10 to feed him. If Bill can’t take Bobby tonight Mark and I are going to take him. I am sleepy today because I didn’t get home till after 12 and that was a little past my usual bedtime. The baby slept till almost 5 this morning but by getting to bed late didn’t help me much.

Had a letter from your Mother. I had written her about the contagious diseases, if there were any around. Floyd & Ruth want us to go down Christmas eve & stay till the 27th but I was afraid there might be something catching as your Mother had mentioned Judy Rae having whooping cough, but she said in her letter there wasn’t anything around now but colds. I haven’t decided yet but think we will stay home. I would have to get some one

[page 3] to take care of the furnace and since we are having a real “old fashioned” winter don’t like to venture away from home that far. I sent your folks a year’s subscription to Reader’s digest. Your Dad sent each boy a dollar. Your Mother had left John & Mark a book she bought in Joliet and sent me a table cloth & David a pr of bootees. I rec’d a very nice desk calendar from Prairie Realty. Geo Tilton said he sent you a calendar. I sent you one in the last box I mailed. After all the Christmas greetings come I’ll send you a list from all received. There were two who remembered to send greetings, who still owe us quite a bill. Maybe I shouldn’t think of things like that while reading a greeting – but it does seem a little farfetched – or does it? We received one from Mrs E. in Norfolk – and while remembering Norfolk, Jim’s address is James L. Foster SK2C, N.O.B Ship’s Company, Camp Bradford, Norfolk. I think I sent it before but can’t be sure. You mentioned my writing to Mrs. Walsh – Well I never did get a letter written, kept intending to then you wrote and told me he had been sent on. I really intended to write to her but I write to you and your Mother & mine and to Ruth M.

[page 4] & Ruth Y. so maybe all those will excuse me for not taking on another.

The sun is shining today but if we have more snow it won’t surprise me. This is three weeks we have had snow on the ground without a thaw. I have lost count of the layers but seems like every time the snow gets dirty there is a clean cover falls. I didn’t get the glad bulbs taken up and don’t expect to now. I shouldn’t put out anything that has to be taken up in the fall.

The guests at the party last night were Howard & Ursula Washburn, Ellsworth & Doris Wilson, Coke & Red Foulkes, Link & Irene and myself. We played bridge. All but Bill and he served drinks and filled in when Arlene helped the girl get the refreshments ready. It was too late to eat so much and I was careful because I didn’t want to lie awake the rest of the night. They served chicken salad, baked ham etc., celery, olives, pickles, potato chips, nuts & coffee. Of course mention was made about “Doc” liking olives & celery. They all asked about you and I wore the necklace which got a lot of attention. So you were much in our thoughts & conversation if not present – By the way Ellsworth wanted to know if you are taking on weight.